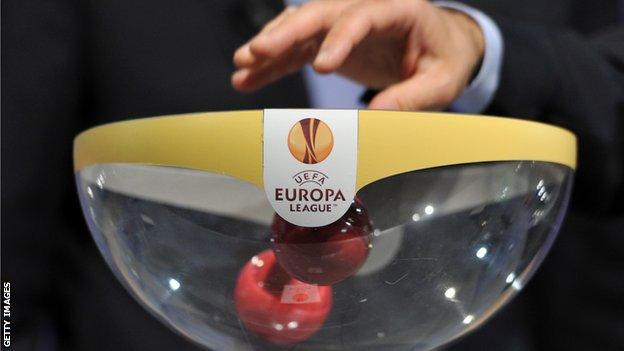 Manchester United, Tottenham and Liverpool await Friday's Europa League round of 16 draw - with an all-English tie a possibility.

Spanish side Valencia, managed by ex-United defender Gary Neville, are also in the draw which takes place in Switzerland at about 12:00 GMT.

Holders Sevilla and German giants Borussia Dortmund are among the favourites to win the competition.

There are no seedings or restrictions on facing sides from your own country.

The final takes place at Basel's St Jakob-Park on Wednesday, 18 May.

Who else is through?

Valencia coasted into the last 16 as they thrashed Austrian hosts Rapid Vienna 4-0 to complete a 10-0 aggregate win.

Fellow Spanish outfit Sevilla, who have won the Europa League for the past two seasons, lost 1-0 at Norwegian side Molde but eased through 3-1 on aggregate.

Swiss champions Basel are still on course to reach a 'home' final after a dramatic injury-time win against French side St Etienne.

Luca Zuffi scored a late goal for a 2-1 win on the night, sending Basel through on away goals after the tie finished 4-4.

Italian title chasers Napoli were eliminated after a 1-1 home draw against Villarreal put the Spanish team through 2-1.