Manchester City will have to win at least nine of their remaining 11 games to win the Premier League title, says manager Manuel Pellegrini.

Fourth-placed City are 10 points behind leaders Leicester after having lost their last three league games.

Pellegrini feels 75 points will win the title - a tally his side are currently 28 points off achieving.

"We have just had a bad moment but we have 33 points [available] to try to reach it," said Pellegrini.

"I said a couple of months ago, before we ended the first round of fixtures, that for me maybe the winner will have less than 80 points. It is impossible to know but I am sure we will have a champion of around 75 points or more.

"We are not going to give up. Ten points is a lot but we have one game [in hand] and in the Premier League you never know when you are going to lose points.

"I don't see why the players would be in a negative mind. I think they try to win every time they play."

City, who won the Capital One Cup on penalties against Liverpool last Sunday and are still in the Champions League, have won just one league game since the start of February - a 1-0 success at Sunderland.

Since then they have suffered three successive league defeats, the latest of which was a 3-0 loss at Liverpool on Wednesday.

Manchester United and West Ham have taken advantage of City's poor form in recent weeks and are now challenging for their top-four place, with the former level on points and the latter a point behind. 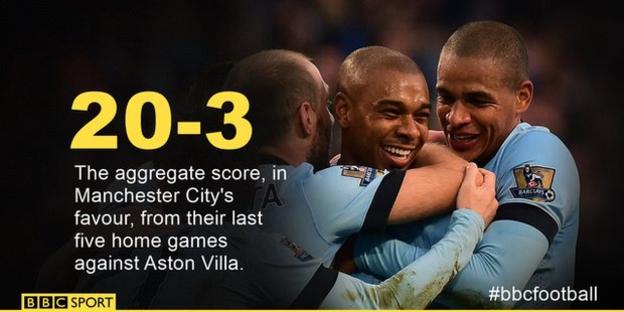 However, Pellegrini is refusing to contemplate the prospect of City failing to qualify for the Champions League in his final season before he is replaced by Bayern Munich boss Pep Guardiola.

"Don't ask me about thinking in a negative way because I never do it," he added. "It's not in my mind, thinking about that at this moment.

"It's important to improve our performance to try to continue fighting first for the title of the Premier League."

City will be expected to return to winning ways this weekend when they host Aston Villa, who are bottom of the league having won just three league games all campaign.

"It must be [victory] because we play at home against a team that is not in a good position - the worst position in the Premier League - but I think the worst mistake we can make is to think we have already won the game," said Pellegrini.

"We must concentrate and try not to make mistakes. All the teams in the relegation positions are difficult because they try to win in any way. I hope we recover our performance and win three points."