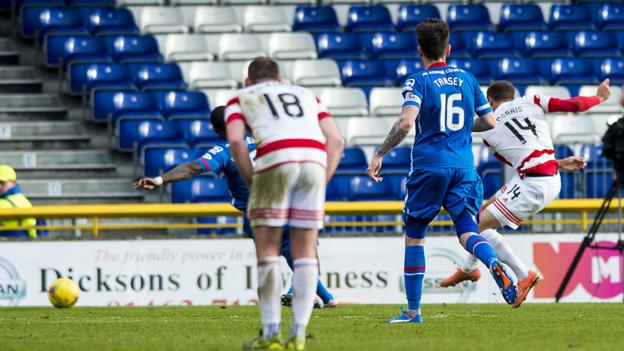 Hamilton pulled level on points with Inverness in the Premiership with a hard-fought win in the Highlands.

After a forgettable first half, Carlton Morris scored the only goal of the game with a low shot across Michael McGovern which went in off the far post.

Inverness maintained top-six ambitions going into this fixture but perhaps more important at this stage was to pull away from the relegation play-off place.

For Hamilton, their entire focus is on staying in the Premiership and a win would have made that task substantially easier. In the end, it went in their favour.

The early stages were cagey with Darian MacKinnon first to threaten with a shot from the edge of the box which was blocked. The midfielder screamed for a penalty but referee Steven McLean said no.

Inverness began to threaten and Greg Tansey gained possession on the left and played an intelligent ball into Liam Polworth's path. His strike was sure but narrowly off target as it arrowed over the bar.

Hamilton came close when Morris nodded on to Gramoz Kurtaj and the midfielder drilled a low shot inches past the far post.

Early in the second half, Vigurs had a great chance with a header but despite having time and space he misjudged the flight of the ball and sent it past the post.

Jordan Roberts then got in behind the Hamilton defence but his touch was too firm and the chance disappeared.

From nowhere a goal arrived and it was a crucial for the visitors. Ross Draper lost possession, Morris found space in the area and drilled the ball perfectly across Fon Williams and in off the post.

Richie Foran and Miles Storey came off the bench for a rare appearance as Hughes - who had received a talking-to from the refeee - went for broke.

Foran teed up Polworth who smashed across goal, and Vigurs saw his instinctive header just miss the far post as Inverness began to press.

Substitute Darren Lyon almost sealed the points on the break when his shot was brilliantly saved by Fon Williams to keep Inverness in the game.

The home side threw everything at the Hamilton defence in the later stages, with Wedderburn going close and Danny Devine heading over.

But Inverness CT are now five points off a top-six place, while Martin Canning's side opened a five-point gap between themselves and the relegation play-off place.