Claudio Ranieri has told his Leicester players that "every match is a final" after the Foxes extended their Premier League lead on Saturday.

"We are running for something special," said Ranieri, whose side have only lost three times in 29 league games this season, winning 17.

"Every match in the Premier League is a battle. Five points is nothing."

Winger Riyad Mahrez scored the only goal of the game in the 56th minute - a brilliant strike from 18 yards. Earlier on Saturday, title rivals Tottenham and Arsenal drew 2-2.

Leicester's next fixture is on Monday, 14 March when they host struggling Newcastle. 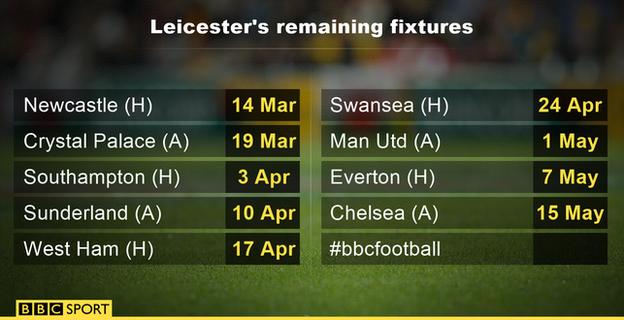 "The fans dream and we work, which is a good combination," the Italian added. "I said to my players, 'every game is a final'.

"We want to continue to fight and now our mind is on Newcastle, which is another tough match at home."

"The goal was amazing," said Ranieri, who substituted the Algerian with 10 minutes remaining.

"The ball was there, the shot at goal was good quality, but we know very well about Mahrez."