Tottenham Hotspur continue their pursuit of a domestic and European double with an eagerly anticipated Europa League last-16 first leg tie against Borussia Dortmund in Germany on Thursday.

Dortmund are one of Europe's best supported clubs and play in the 81,300-capacity Westfalenstadion.

But how are the 2013 Champions League runners-up coping with life after Jurgen Klopp? Who is their main threat? What are they saying in Germany about Tottenham?

Here, we take a look at what awaits Tottenham in Westphalia.

Replacing long-serving and successful boss Klopp was always going to be a challenge but in Thomas Tuchel Dortmund have learned to have fun again.

Tuchel, polite but far less of an extrovert than Klopp in his interviews, is regarded as one of Germany's top coaches.

The 42-year-old set a new club record at Mainz by winning the first seven league matches of the 2010-11 season before standing down from his post in 2014 after leading them to their highest Bundesliga finish.

After taking 12 months out, Tuchel started his Dortmund reign with five straight league wins and they enter the latter stage of the season in the running for silverware.

Despite failing to defeat Bayern Munich in 'Der Klassiker' on Saturday, they are second in the table, five points behind the leaders. In addition to the Europa League, Dortmund are also through to the semi-finals of the German Cup.

Tuchel's dealings in the transfer market have also been impressive - goalkeeper Roman Burki and young midfielder Julian Weigl were low-key arrivals but both have both been influential.

Tottenham will be hoping there are no somersault celebrations in the Westfalenstadion. If there are it will undoubtedly mean Pierre-Emerick Aubameyang has scored.

African Football's 2015 player of the year has 22 Bundesliga goals this season. Having left AC Milan without making a senior league appearance, Aubameyang is now one of the most feared forwards in Europe's top five leagues.

The Gabon international has two hat-tricks this season, including one against Azerbaijan's Qabala in the Europa League. 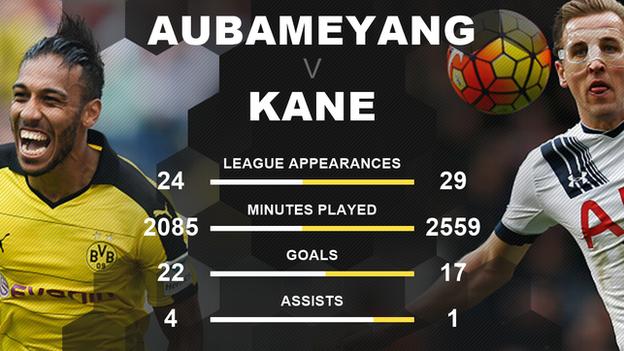 His goals have seen him linked with moves to Arsenal and Barcelona, but speaking in January Aubameyang said: "I still want to achieve lots with Dortmund.

"I am here and nowhere else - not at Arsenal, not at Barcelona, not on the moon - you can see that."

As well as the game itself, Dortmund's Westfalenstadion will be quite a spectacle.

Expect plenty of noise and colour, particularly in the the south stand, which is the largest free-standing grandstand in Europe with a capacity of 25,000. It is also known as "The Yellow Wall", reflecting the home team's colours.

Dortmund's fans are among the most passionate in Europe. They regularly fill their vast 81,000 capacity ground. The stadium - also known as Signal Iduna Park under a sponsorship agreement - hosted matches at the 1974 and 2006 World Cup.

What they are saying

Tottenham boss Mauricio Pochettino: "There are some similarities between ourselves and Borussia Dortmund. It's exciting for us to play against them. Now it's all about making the right decision and picking the 11 players to compete in the best way."

Dortmund captain Mats Hummels: "We are very happy with the draw. I think we've got a good chance of progressing, but to do so we have to produce the goods. It's a golden opportunity, everything that we had imagined in the Europa League and the next crunch encounter after Porto."

There is the perception in Britain that tickets don't cost that much in Germany, yet Dortmund fans threw tennis balls onto the pitch during a German Cup victory over Stuttgart in February in protest against ticket prices.

They were unhappy at the rising cost of attending Bundesliga games, with a quarter of away tickets for last month's match costing 70 euros (£54). "When it comes to standing tickets, it's OK," Dortmund fan Marc Quambusch told BBC Radio 5 live. "But you don't have so many standing tickets. It's not cheap, in a way."

Tottenham will have around 3,400 fans in the ground, with adult tickets costing £36. Dortmund fans sing "You'll Never Walk Alone" before each home match.

Tottenham signed midfielder Steffen Freund from Borussia Dortmund in 1998. Freund, 46, won the 1995 and 1996 Bundesliga titles with them, as well as the 1997 Champions League.