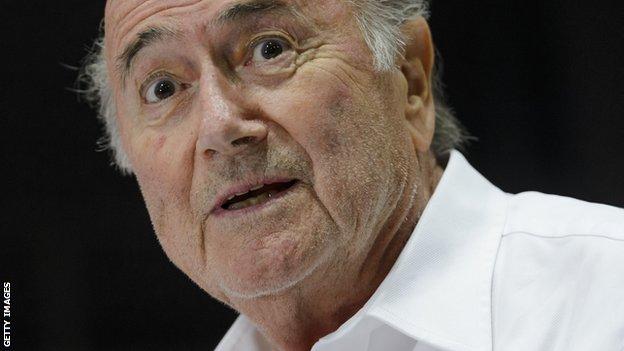 According to Switzerland's office of the attorney general, the documents are connected to "the suspected payment of 2m Swiss francs [£700,000]".

It said the search in Paris was carried out at Switzerland's request.

The criminal investigation into Blatter, 79, began in September.

The office of the Swiss attorney general said the FFF consented to the search of its Paris base, which was carried out on Tuesday.

Swiss prosecutors have accused Blatter of criminal mismanagement or misappropriation over a TV rights deal and of a "disloyal payment" to suspended Uefa president Michel Platini.

Blatter, who served as head of world football's governing body from 1998 until 2015, and Frenchman Platini have denied any wrongdoing.

The pair have been suspended from all football-related activities for six years after a Fifa ethics committee investigation found them guilty of breaches surrounding the payment to Platini in 2011.

They have both said they will appeal against the decision to the Court of Arbitration for Sport.

Blatter and Platini say the payment honoured a verbal or gentleman's agreement made in 1998 for work carried out by the Frenchman when he was a technical advisor for Blatter.

Last month, Uefa general secretary Gianni Infantino was elected as Blatter's successor and has vowed to "restore the image" of Fifa.