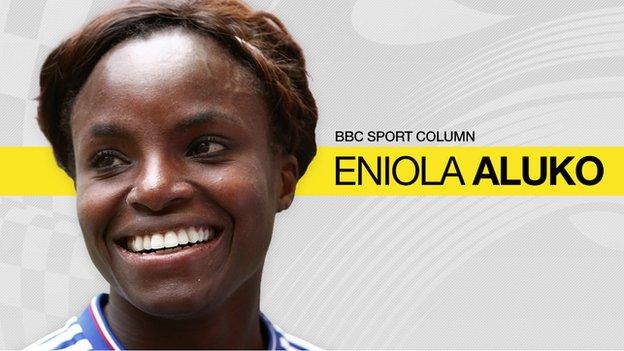 After reaching 100 England caps in our last match of the SheBelieves Cup against France, I was reminded by one of my team-mates about the first time I turned up to an England camp.

My mum insisted I should dress smart for the big day so I wore a skirt suit, only to find on my arrival that everyone else was wearing tracksuits.

I was only 15, but it was still embarrassing, and to make matters worse I ended up getting an embarrassing score in my first bleep test.

I thought it was a speed test, so sprinted the test from the start, not realising that there was a gradual increase in how hard it would get. By the time we reached level five I was dying and dropped out, even though that's only halfway to a decent standard. What an impression to make on your first day!

Fortunately that wasn't the end of my England career, and 100 caps later I feel incredibly humbled to become the 10th England women's player to achieve that mark.

When you look at some of the names from both men's and women's England teams to have earned 100 caps, they are real legends of the game: Sir Bobby Charlton, Bobby Moore, Kelly Smith, Peter Shilton, Fara Williams, David Beckham, Casey Stoney and Steven Gerrard.

So many of those players are role models to me and if my international career ended today, I would be very proud of what I've achieved, but after two defeats and a draw in the SheBelieves Cup, there is plenty to look forward to as we prepare for the European Championship next summer.

An emotional surprise as I took the field

The achievement of reaching 100 caps actually made it a better day than I expected, based on the fact that I started the France game on the bench and wasn't sure if I would play a part.

But once the manager Mark Sampson said I was going on, it began to dawn on me, and I received a special surprise as soon as made my way onto the pitch. Our skipper Steph Houghton immediately handed me the England captain's armband, which I've never worn before.

It was an incredible gesture and although I feel a huge sense of responsibility every time I play for England, all of a sudden I felt quite emotional so I had to quickly refocus on the game.

I was determined to make an impact off the bench and, after a first half where the team was under pressure, I feel like I played my part in helping the team turn things around in the second half.

Had we been more clinical, then I think we would have won the game.

When reaching 100 caps, you are asked whether you want to make a speech in the dressing room and I was privileged to follow in the same tradition by giving a speech to the players and staff.

It was important to thank many of the people in the room who have been by my side through the good and bad moments during my career. Some of the players in the room have been my team-mates for 10 years and, through our shared experiences, have become friends.

I also wanted to thank the head of team development, Adam Streeter, who has been great with me, and I wanted to send a message to the players who may have another 70 or 80 caps ahead of them to never take playing for England for granted and to honour the badge every time they put on a shirt. I know that should go without saying but I felt it important to reiterate the point.

I've been overwhelmed with messages of congratulations from people I've known for years, and I just want to thank friends, family, coaches and team-mates who have helped me reach this stage of my career. The 48 hours since the game have been amazing.

Lessons learned from the tournament

Despite losing to the United States and Germany, and picking up a point against France to finish third, we realised we are not far off beating these teams.

That is the key aspect: turning encouraging performances into victories. I spoke to some of the US players after we played them and they said they were surprised how tough we were to break down before Crystal Dunn's superb goal.

The defensive approach is evident in the manager's tactics, now we just have to create more chances, and turn those into goals. There were signs of us doing that against the French.

Some people might say that the results show the World Cup win over Germany was a fluke but every game is different. The important aspect now is that we can beat Germany on a good day, and that wasn't always the case in the past. This time they got the penalty decision which swung the game in their favour.

Although we are still in pre-season, some of our GPS results were as high as our opponents, who are in mid-season, so we cannot use fitness as an excuse and sometimes losing helps by putting a spotlight on what we really need to work on.

I would have preferred more playing time, but hopefully I can keep performing consistently and work hard to make the squad and the starting line-ups for next year's tournament so we can prepare for Euro 2017 in the best way.

By that stage we will better prepared than ever and in a position to confidently say we are ready to win a major tournament.