"Sergio, great goal against David de Gea. Now forget that, get changed quick and get back on the coach. We're off to Wembley to play Chelsea in a cup final nobody cares about tomorrow. Get a wriggle on."

The reaction of Aguero and Yaya Toure would be priceless.

But that's pretty much the gist of the chat that faced the then Manchester City side and their fellow Full Members Cup finalists of exactly 30 years ago.

What do you mean you've never heard of it? What about the Simod Cup? ZDS Cup? Ring any bells?

The much-derided competition, which ran from 1986 until 1992, was for teams in the top two divisions, but snubbed by the big clubs and initially largely ignored by fans of the teams who did actually enter.

It was a different era, of course. Very much pre-Premier League. Mudbath pitches, near maimings needed to get yellow cards, with pre-match pasta and post-match warm-downs solely the preserve of wimps.

Yet 68,000 made it to the final on a sunny spring day in 1986 to watch title-chasing Chelsea edge out a skint City outfit 5-4 in a classic that featured the first Wembley hat-trick since Geoff Hurst's treble in the 1966 World Cup final.

"The final took place the day after a Manchester derby. It was ridiculous - Old Trafford on Saturday and Wembley on the Sunday was a hell of a weekend for us," said City winger Paul Simpson, who came on as a substitute in both games.

"We were 2-0 down against United at half-time and drew 2-2. I just remember getting straight on the bus from Old Trafford and going down to London.

"There was none of the massages or recovery you get after games today. They talk about eating in this 'golden hour' after the game. But we literally just got up the next day, and started preparing for the final." 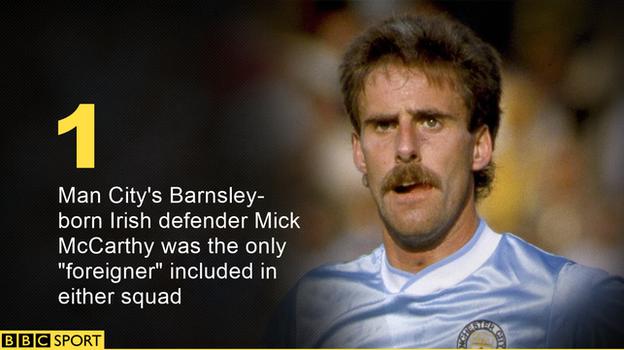 Although United fans did throw pies at the team coach as it was leaving the ground, food was not the main concern of two-goal striker Mark Lillis and his team-mates, in a side assembled at a fraction of the cost of today's City squad.

They were gagging for a pint after the derby exertions which had earned a point against a side including Mark Hughes, Gordon Strachan and Paul McGrath.

Lillis, one of seven Manchester-born players in the Wembley side, told BBC Sport: "We could see the manager, Billy McNeill, was having a couple of beers at the front of the coach and I asked on behalf of the team if we could get together at the hotel and just have one beer and then go to bed.

"He went absolutely mad and said: 'What do you think we are, a pub team?'

"I looked back up the bus and everyone was ducking behind chairs and under tables - none of them were backing me up.

"We ended up getting to the hotel and I had to make do with a cup of tea instead."

Chelsea closing on 'a double' 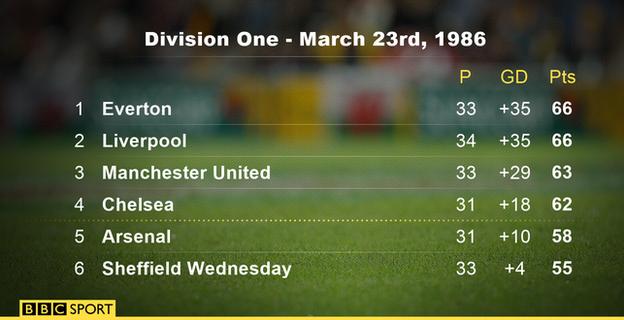 Chelsea, back then the surprise contenders in a wide-open title race, did not have as far to travel as City, but they also had a quick turnaround after beating Southampton on the Saturday.

Winger Pat Nevin, who was involved in three of the goals at Wembley, told BBC Sport the rapid response to the win at the Dell didn't faze him in the slightest.

"Playing two games in two days had absolutely no effect on me," Nevin told BBC Sport.

"I had been a long-distance runner before I was a footballer and I saw it as an advantage because I thought: If everyone else is knackered, I will be OK.

"Wembley was a huge, lush pitch and particularly draining to play on, but we didn't do anything special at all after beating Southampton.

"I think we came back on the coach and went home. And our warm-down after winning the cup was parading the trophy on the pitch. We wouldn't have considered doing any stretching."

So what was the Full Members Cup?

The competition came about because of the European ban on English teams following the Heysel disaster in 1985.

It was the brainchild of Chelsea chairman Ken Bates for teams in the top two divisions of the Football League.

Dismissed by most as a needless competition created purely to swell the coffers during difficult times, participation was voluntary, and the inaugural competition was not surprisingly snubbed by 'The Big Five' of Liverpool, Manchester United, Arsenal, Tottenham and Everton.

Even supporters of the teams who did enter were far from convinced by its merits, as some pitiful crowds in the regional group stages and knockout rounds proved.

Yet something "magical happened" when Wembley Way loomed into view.

"In the early rounds it wasn't taken seriously but Chelsea hadn't been to Wembley for a long time," said Nevin.

"I had a really enjoyable day - it wasn't the FA Cup or the League Cup but, for that moment and for the Chelsea fans, it was them getting to a place where they felt they should be.

"Now if you look back it has a very, very little importance. But at the time it was a big deal." 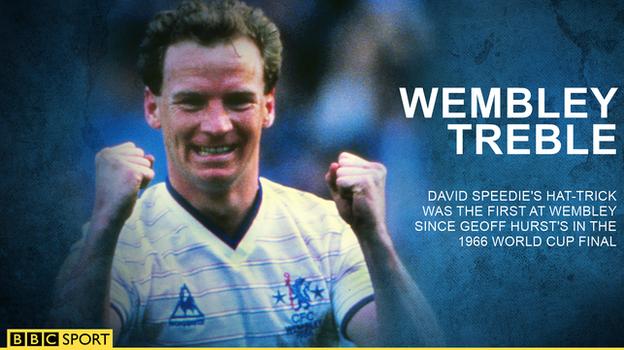 Two teams both playing in their away kits produced one of the least well-known, but certainly one of the most exciting finals ever to grace the old Wembley.

"I think it was the only time I ever won anything at Wembley," Chelsea legend John Hollins - their manager at the time - told BBC Sport.

Chelsea trailed to an early Steve Kinsey strike, but David Speedie headed a leveller on his way to the first Wembley treble since Hurst's and what remains only the second hat-trick in a senior domestic cup final in the 93-year history of Wembleys old and new - the other was by Stan Mortensen in the 1953 FA Cup final.

Stand-in striker Colin Lee, who was playing in place of injured England forward Kerry Dixon, also scored twice as the men in white went 5-1 up in a ludicrously open game.

'I'll get hammered by my family'

But incredibly, City - inspired by some sumptuous wingplay by Simpson - hit back through a spectacular headed Doug Rougvie own goal, which came in the middle of two strikes by Lillis.

"One thing I'll always remember," said Lillis, "is being stood on the halfway line after Chelsea had scored, looking up and seeing where my family were and then looking round at the big scoreboard showing 5-1 and thinking: 'Oh God, I can't go back to Manchester now. I'll just get hammered by my family and everyone else.'

"Before we knew it, Simmo came on and we were back in the game."

Hollins added: "It was a fantastic match and we played some lovely football.

"Coming to the best stadium in the world, you want to win, no matter what the cup. We were cruising and maybe took the foot off the pedal a bit but we just about did enough. At least the finish made it exciting." 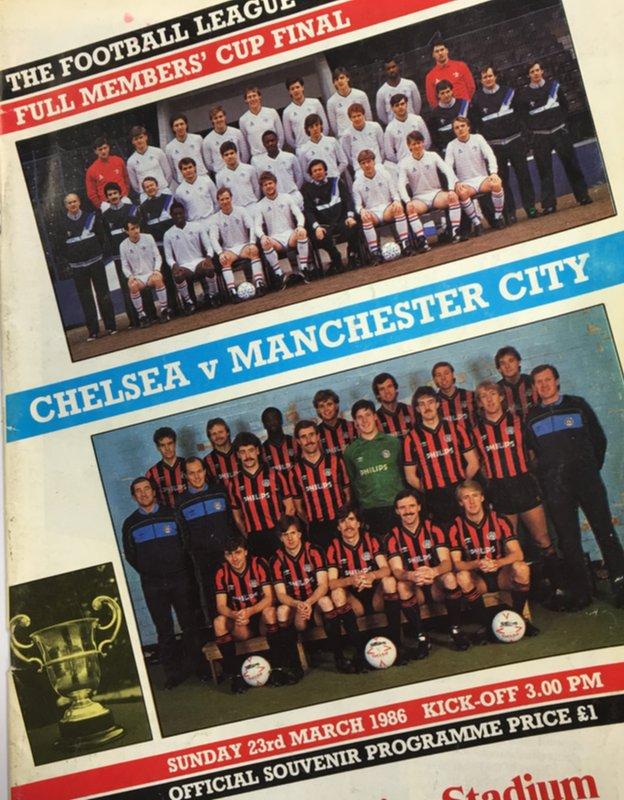 The crowd on a sunny day in north London is recorded as 67,236 but, although it now seems incomprehensible, punters could pay on the day. And, by nearly all accounts, it would seem there were significantly more there than suggested by the official attendance - impressive as it was.

It cost as little as £5 to get in and £1 for the programme, but supporters from both sides were seen slipping through the turnstiles at the Twin Towers.

Staggeringly there were also those who scaled the Wembley walls to get in for free and, in the days of standing at Wembley - and depending who and what you believe - estimates put the total 'extra' attendees as anything from between 2-10,000.

Whatever the actual size of the crowd, it was of a number befitting such a memorable cup final. 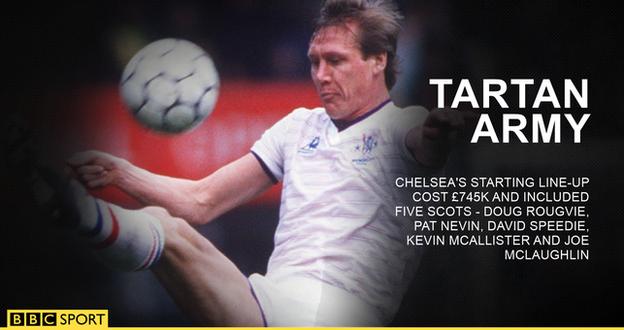 City's young side finished the season in 15th place - just four points clear of the relegation zone, but went down the following season.

And the tournament itself? It lasted seven more years, under three different guises, but was never taken that seriously.

"The 1986 final was not live on TV and there are hardly any clips of it on the internet," said Lillis. "Most people have forgotten about it and I look back sometimes and think 'did that really happen?', but it was one of the best moments of my career."

There were six Scots, 14 Englishman, with four more on the bench, a German-born Welshman in David Phillips, and Barnsley-born Republic of Ireland international defender Mick McCarthy.

The last time the two sides met in the league - a comprehensive 3-0 home win for City in August - there were only four Englishman between the two starting line-ups, with just two more from the 14 players on the bench. Only John Terry, who started but was taken off at the break, was home grown. 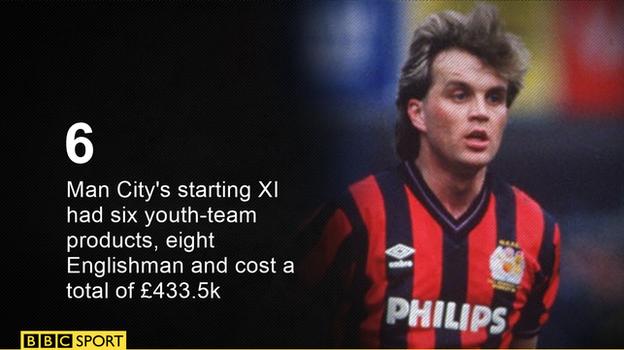 Here's how an extract from an article by Peter Gardner, in the Manchester Evening News of 24 March 1986, summed it all up (via citytilidie.com):

"At least the Full Members Cup will go down into the record books with some dignity and respectability.

"The Football League's most embarrassing and ill-conceived competition finished a money spinner at Wembley yesterday. A remarkable 68,000 turn-out poured in an equally staggering £500,000-plus."