Leicester City moved eight points clear at the top of the Premier League after Riyad Mahrez's goal saw off a stubborn Crystal Palace side.

Mahrez missed an early chance after being put clean through but made amends when he turned in Jamie Vardy's cross.

Damien Delaney hit the bar for Crystal Palace in injury time, but the Foxes held out to clinch another vital win.

The Eagles are into the FA Cup semi-finals but remain without a league victory since 19 December.

Relive the action from Selhurst Park

Leicester manager Claudio Ranieri revised his points target for the title this week - moving it upwards from 79 points to 82 points, which is the most that nearest rivals Tottenham can manage if they win all their remaining games.

However Spurs do, Leicester know that if they win six of their last seven fixtures - and reach 84 points - nobody can catch them. 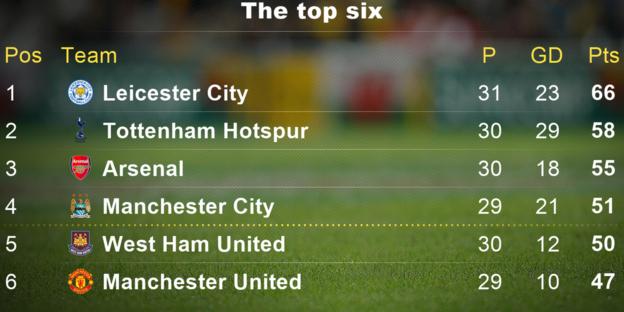 Winning is what the Foxes are doing pretty well at the moment. Saturday's success was their third in a row, and the way it came will surprise nobody.

Ranieri's side have now won 13 games by a single goal this season, more than any other top-flight team.

They also have the best away record in the Premier League, with 10 wins on their travels.

They will take some shifting from the top of the table, as their fans did from Selhurst Park.

The Foxes supporters sang "we're going to win the league" solidly for 15 minutes after the final whistle, and it took repeated announcements from the stadium announcer to persuade them to leave.

Palace certainly put plenty of effort in as they attempted to end their dismal league form - they are the only club in the top four divisions without a home win in 2016.

They fired 31 crosses into the Leicester area, with substitute Bakary Sako proving particularly dangerous when he came on.

However, the Eagles could not find a finishing touch and their sixth-straight home league defeat means their relegation worries remain very real.

Norwich's win at West Brom means Palace's eight-point cushion above the bottom three will be reduced on Sunday, no matter what the outcome of the north-east derby between Newcastle and Sunderland.

Man of the match - Wes Morgan

Crystal Palace boss Alan Pardew: "We are down, frustrated, we wanted to keep momentum after the FA Cup win over Reading but Leicester are top of the league for a reason. They have a lovely balance to the team, they will be difficult to catch and they would be worthy champions."

Leicester manager Claudio Ranieri on being top of the league by eight points: "It sounds good, our fans are singing a very good song about that but we are to stay calm because the Premier League is the same as every match, you don't know what will happen.

"We have to continue to push a lot because the Champions League is very close to us. Maybe in the next two matches I can say something more."

Leicester can take another step towards the title when they host Southampton on 3 April.

Palace will aim to end their 13-match winless run in the league when they travel to West Ham the previous day.