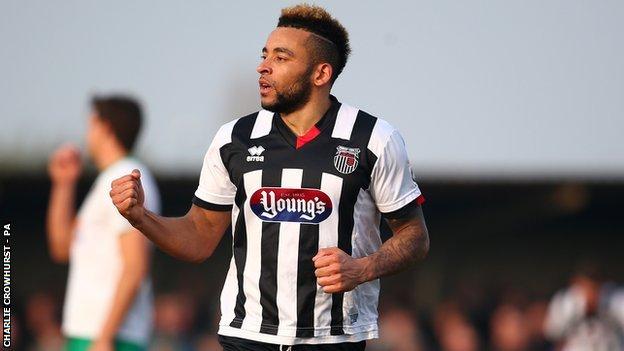 Grimsby Town and FC Halifax Town appear on course to meet at Wembley in the FA Trophy final in May after both recorded semi-final first-leg away wins.

The two National League sides were up against seventh-tier opposition - and both games went with the formbook.

Nathan Arnold scored the only goal to give Grimsby a 1-0 win at Isthmian League high-fliers Bognor Regis.

Two-goal Jordan Burrow, Scott McManus and Waide Fairhurst scored for Halifax in their 4-2 win at Nantwich.

The Northern Premier League side scored through Sean Cooke and Matty Kosylo but the Dabbers, bidding to become the first team to win both the FA Vase and the FA Trophy, have their work cut out to turn the tie round.

The second legs ties are next Saturday (19 March, 15:00 GMT) to claim the prize of a place at the first ever Non-League Finals Day at Wembley Stadium on Sunday 22 May.

The FA Vase final will take place before the FA Trophy final - and who will be taking part looks much harder to call.

In the meeting of the two phoenix clubs, Hereford beat Salisbury with Mustapha Bundu header four minutes into the second half in front of a capacity 4,683 crowd.

In the other semi-final, Essex Senior League side Bowers & Pitsea came from two goals down at the Len Salmon Stadium to draw 2-2 with Morpeth, from Northumberland.

After Sean Taylor's superb 40-yard lob and a second goal from Michael Chilton, Morpeth had an effort cleared off the line on 68 minutes.

But Bowers went straight up the other end to scramble a goal back through Lewis Manor before Alfie Hinton poked in an 89th-minute equaliser.