There was an article in the Birmingham Mail this week where former Aston Villa manager John Gregory said the club should have signed me in the summer - and 78% of their fans agreed with him.

I think Gregory has said that on numerous occasions, though, and the percentage of Villa fans to agree has gone up each time - when he first said it last summer, it was only about 20%.

Hindsight is a wonderful thing but the reality of it is that, as great as I think I am, I don't think even I am good enough to play in that side and keep Villa in the Premier League.

Seriously, though, I think everyone knows how bad Villa are at the moment, especially their own fans.

I have criticised the running of the club a lot recently when I have been on BBC Radio 5 live and this piece is not going to go through all their off-field problems again.

Instead, when I analysed their defeat at home to Tottenham as a pundit on Match of the Day 2 on Sunday, I wanted to look at what is happening on the pitch, and see if there were any positives to be taken from their performance.

Forward thinking full-backs works for Spurs, but not Villa

One of the first things I wrote down in my notes when the game started was that Villa's back four is better offensively than it is defensively.

By that I basically mean their full-backs on Sunday, Alan Hutton and Aly Cissokho, were great at going forward, but not so good at getting back.

That is fine if you have got cover - Tottenham were doing exactly the same with Kyle Walker and Danny Rose bombing up their flanks but they had a holding midfielder, Eric Dier, who dropped in to give them a back three if Villa counter-attacked.

If your full-backs push on, it also exposes your centre-halves. Again that was not a problem for Tottenham because Toby Alderweireld and Kevin Wimmer are young and fast, but it was an issue for Villa. 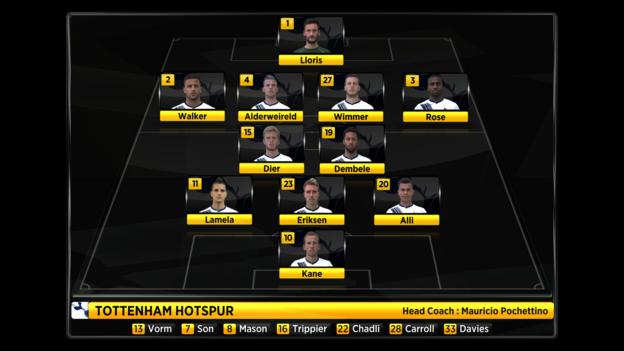 Joleon Lescott has been a solid defender down the years but his lack of mobility is now very clear to see and his partner Jores Okore also struggled.

They needed a midfielder to come in and help them out with an extra body, but they were not getting that support, and they were often left wide open.

As I discussed on the show, Harry Kane's positioning and movement caused Lescott and Okore problems all game because he never allowed them to mark him.

He stood in the middle of them, because he knew their lack of pace meant he could stay on their shoulder and keep them both occupied on his own. Neither of them could step up and man-mark him because they each had to give cover to their full-backs when they attacked.

The way Villa were set up meant there was space for Tottenham to exploit down the wings and that is exactly how they scored their first goal.

Just before Dele Alli took the quick free-kick, Hutton gambled and moved forward, which left him on the wrong side of Kane. He could not get back, and neither could Ashley Westwood who was limping and unable to cover.

Villa do not play to Gestede's strengths 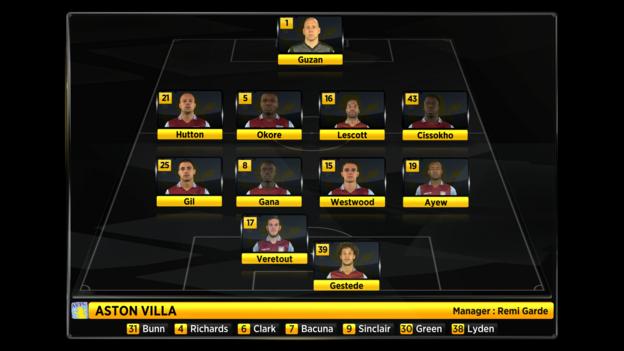 Villa are not just bottom of the table with the worst defensive record, they have scored the fewest goals too. Watching them on Sunday, I could see why finding the net has been such a problem.

Their team against Spurs had two strikers in it but one of them, Jordan Ayew, was on the left of midfield.

I played with Ayew at Marseille and he is a central striker, either on his own or with a partner, but he was being asked to be a left midfielder and get up and down that flank.

Villa's other striker, Rudy Gestede, was playing in his correct position up front. He is a big striker who is good in the air and he can be effective but only if he gets the right service.

The problem was that his left midfielder was Ayew, who is never going to look to get outside Tottenham's full-back and get crosses in, and on the right was Carles Gil.

Gil is left footed and is not going to put in crosses either - he is great at coming on as an impact player late in games and upping the tempo but playing in that position he is like a five-a-side player who likes to cut in from the right on to his left foot.

So, they have got a striker whose strengths are heading and causing mayhem in the box, but they picked two wingers who don't cross the ball, and also do not provide much defensive support to their attacking full-backs. The mind boggles sometimes.

Hope for the future - but in the Championship

Villa had some chances in the second half and, on another day, they could actually have nicked a point.

Realistically, though, that was only down to Tottenham's poor finishing and some good saves by Brad Guzan. Otherwise, the game would have been over at half-time.

The league table does not lie at this stage of the season and Villa are where they are for a reason.

From what I saw on Sunday, it is mainly because they do not defend well, especially as a team.

They need to start rebuilding, and I think there were a few green shoots of recovery on Sunday with 17-year-old forward Andre Green coming on for the last half-hour.

I have said before that they should give their kids a chance. They have always had a good academy so why not use it, because how much worse could the first team really get?

Hopefully things will change off the pitch too. Brian Little and David Bernstein joining the board is a good start, but it is going to be next year, when they are in the Championship, that they will see any effects.