Nottingham Forest fans woke up to a worrying and all-too-familiar feeling on Monday morning.

Dougie Freedman has become the sixth full-time manager to be sacked by owner/chairman Fawaz Al Hasawi.

The chances of the two-time European Cup winners playing Premier League football again seem further away than when the Kuwaiti businessman took control less than four years ago.

What are the reasons for the decision? Will history repeat itself in 12 months? And who's in the running to take over? BBC Sport takes a look. 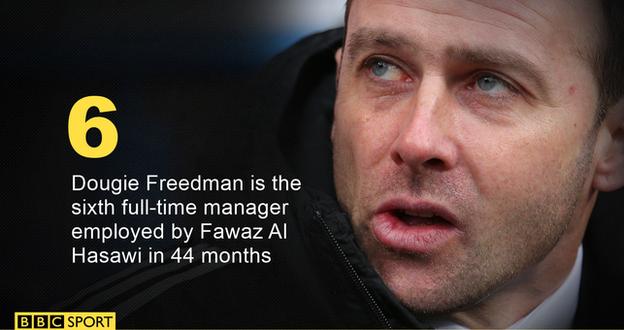 Including caretaker managers, Paul Williams - who is in charge until the end of the season - is the eighth man to lead Forest during Al Hasawi's 44 months at Forest.

The average spell in charge has been five-and-a-half months.

Steve Cotterill was sacked soon after the Al Hasawis arrived in July 2012, and the turbulent times have continued Trentside ever since. Sean O'Driscoll, McLeish, Davies, Stuart Pearce and Freedman have all come and gone.

Williams is the second caretaker-boss, with Gary Brazil having a nine-game spell in charge after Davies was sacked in March 2014.

The Al Hasawis have stacks of money, but they have been unable to spend it because of the Financial Fair Play rules and the imposition of a transfer embargo.

Competing with big-spending clubs when he could only bring in loan signings or free transfers, and on restricted wages, proved impossible for Freedman.

Injuries did not help him either. Nine players were unavailable for last Saturday's 3-0 home defeat by Sheffield Wednesday, including club-record buy Britt Assombalonga, who was injured during Freedman's first home game in charge and is still out.

Burnley are top of the pile in the Championship with their big summer signing Andre Gray playing a key role.

Middlesbrough have spent heavily, including January signing Jordan Rhodes, while Sheffield Wednesday have not been shy in the transfer market.

And Forest's local rivals Derby - despite their own troubles and indifferent form - have spent around £25m and remain in fifth place.

So why did Al Hasawi decide it is time for another change?

He told BBC Nottingham Sport his decision was taken because of the increasing threat of relegation, dwindling attendances and concerns about the style of football.

The Reds remain nine points above the Championship's bottom three, despite losing five of their last six, but Saturday's 3-0 home defeat against Sheffield Wednesday proved a tipping point.

"Freedman decided in November, when they were only two points clear of the relegation zone, that he needed them to be more difficult to beat," he said. "That led to a style of play many thought unattractive - and that's been blamed for falling attendances.

"But playing that way produced a 13-game unbeaten run, bringing 25 points and leading to Freedman talking tentatively about the play-offs."

In February 2015, following the messy sacking of Reds legend Pearce and swift appointment of Freedman, Fray set out some of the issues and concerns.

"From a position of respect, reliability and repute, Forest have descended into a world of resignations, reprimands and reputational damage," Fray said.

"If Dougie Freedman's task is to stabilise things on the pitch, Mr Al Hasawi should be doing the same off it."

Much of that still seems applicable, but little seems to have been learned. Will we be here again in around 12 months - with February and March seemingly the favoured time of year for Forest to get rid of their manager?

Is there any likelihood of the pattern changing before then?

Fray added: "Freedman's unbeaten run in November to February seemed to have paved the way for some stability, especially with the club on course to come out from the embargo at the end of the season.

"But fears of relegation seems to have overidden any desire for stability and means, for the fifth season in a row, Forest will end their campaign with a different manager to the one who started it."

Reaction - Forest 'robbed of an identity'

The latest change Trentside seems to have left the Forest faithful further disheartened.

"I don't think anyone questions his desire," Wright said.

"He has put an awful lot of money into the club, but after four years of constantly changing things around and the decreasing results on the pitch and worsening situation in terms of finances, I don't think he has given us anything to believe in terms of having confidence and decision-making.

"I can't see how he's added anything since he came to the club. He seems to just have robbed us of identity with all of this constant change."

Freedman's successor will have a great opportunity at a club with a magnificent history, but many have tried and failed. Will a big-name manager fancy it? Is the threat of being sacked too great and the risk of interference too much?

Perhaps the most sensible - if not necessarily most appealing option - to many supporters at this stage is Burton Albion manager Nigel Clough, the former Forest striker whose father Brian led the club to those two European Cup successes in 1979 and 1980.

Nigel Pearson, the Nottingham-born former Leicester City manager, is also being linked, and Billy Davies is available again. But surely the rift that saw the Scot depart the City Ground for a second time means there is little chance of any unfinished business actually being finished.

Of course, Jose Mourinho is also free - but a more realistic appointment, with a connection to the ex-Chelsea boss, might be Middlesbrough's Aitor Karanka.

The Spaniard, who worked with Mourinho at Real Madrid, is considering his future at Boro and there are strong rumours that Al Hasawi favours a foreign boss, with former Chelsea defender Dan Petrescu having been linked when the role has previously been available.