Another stand-out performance for Premier League leaders Leicester on Monday saw the midfielder cover the second-highest distance for his side (11.07km), as well as play the most passes anywhere on the pitch (65) and the most in the opposition half (39).

On Thursday, England coach Roy Hodgson named the 26-year-old in his squad for the friendlies against Germany and Netherlands.

How does he rate among English midfielders?

Fellow Premier League midfielders might want to ask Drinkwater and N'Golo Kante what batteries they use, because of their seemingly undiminishing energy levels.

The heatmap below shows that Drinkwater sits in the area in front of the back four. His rivals in that role for England could include Eric Dier, Michael Carrick, Fabian Delph, Jordan Henderson and Phil Jones.

So how good is Drinkwater at protecting?

Well, he has made more successful tackles than any other English Premier League midfielder. Incidentally, team-mate Marc Albrighton is joint sixth with 47, and Dier and Liverpool's James Milner are joint eighth.

And don't think of him as simply a destroyer - because he also rates well when it comes to passing statistics.

So if Hodgson is looking for someone who offers more than just a screen for a suspect defence, Drinkwater could offer options there too.

Although Drinkwater may lack goals, having scored only one in the league this season, his creativity from a deeper position still compares favourably with more attack-minded midfielders.

Opta stats show he has created 36 chances including assists, with Everton's Ross Barkley on 41 and Tottenham's Dele Alli on 47.

'Drinkwater is a round peg for a round hole' 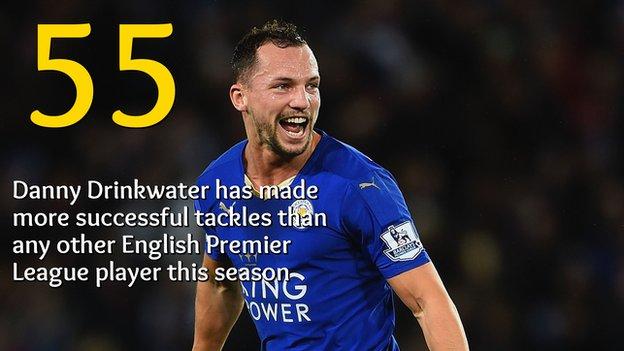 Former England international Trevor Sinclair told BBC Sport that Hodgson should push aside any loyalties in order to include the in-form Drinkwater.

"It's a no-brainer for me - Drinkwater should be in the squad," he said.

"You have to be cruel to be kind to some of the players who were involved in the Euro 2016 qualifiers, but have not played regularly.

"They've been injured, not been consistent or shown any form. But because of Roy's loyalty, some of them will find themselves in the squad.

"Danny is coveted as a holding midfielder and he's been in a successful squad this season. It's a round peg in a round hole.

"I want to get players in who want to do the nasty stuff that others don't want to do. Danny fills that criteria. He's of good stock, coming from the Manchester United academy.

"He's improved massively. He's combative and keeps the ball well and doesn't lump it upfield. That is ideal for international football, where ball retention is so important."

West Ham midfielder Mark Noble is another uncapped player being backed by former professionals and fans alike to make the Euro 2016 squad, with the stats supporting those claims.

"He's been linked with the squad for a long time, but been unlucky because we've had good midfielders," added former Hammers midfielder Sinclair, who won 12 caps.

"But now you look at England. There are spaces to be claimed and I think Mark should take one of them."

John Hartson, another former West Ham player, says this could be Noble's final chance to play at a major international tournament. 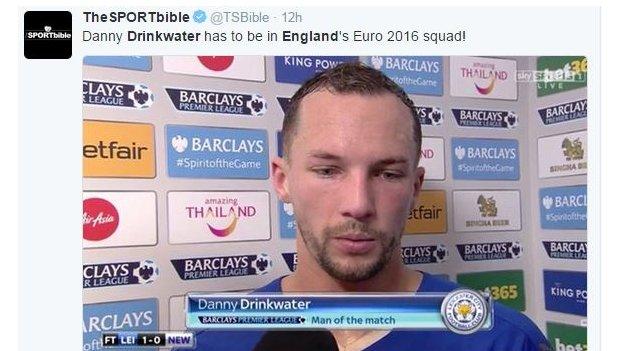 The view from up close

• Danny Drinkwater has the hunger which no other England player has. He's waited a long time to prove himself at this level and showcase his talents. Can you imagine the desire coursing through his veins to pull on that shirt? That's what Roy Hodgson needs.

• His range of passing has been the best I've seen this season in the Premier League. He learned plenty last season from Esteban Cambiasso - when the former Argentina international was at the club - and can deliver a 60-yarder like an accomplished international, while digging away when required.

• It means the world to him. You'll see Danny having a moan to himself when things aren't going 100%. A true perfectionist.

• Danny Drinkwater will be a relatively unknown name to the Russian and Slovakian midfields I'm sure, allowing the Three Lions to catch them cold.

• Drinkwater and Jamie Vardy have a wonderful understanding. Not only has one been the provider for the other's goals but they can hunt in packs together to flood advanced areas and win the ball back quickly. Roy is going to start Vardy up front. Isn't he? Roy?

But what does Roy think?

The final decision falls to Hodgson, with the deadline for the 23-man squad on 1 June - 10 days before the tournament starts.