There is no question they have struggled at the back without Kompany this season, and it is a big boost for Manchester United that City's captain is out again.

That is not the only reason City are off the pace in the Premier League title race, though. By their own high standards, their attack has under-achieved this season.

Despite their defensive issues, City have only conceded a fraction more goals than in previous seasons under Manuel Pellegrini, and they are actually allowing the opposition fewer attempts at goal per game.

At the other end of the pitch, City have hit 52 goals in 29 league games - enough to make them the third-highest scorers in the top flight behind Leicester and Tottenham, who both have 53.

But they have scored 27 fewer than at this stage of Pellegrini's first season in charge, are also down on 2014-15's goal tally, and are creating fewer chances than before too.

A lack of quality cover up front

City's mentality since Pellegrini took charge in 2013 has been 'we will score more goals than you'.

There is nothing wrong with that when you have high-quality attacking players, and it worked in his first season when they won the Premier League.

But you are not going to have the same points tally if you cannot maintain your creativity and scoring record and do not improve significantly defensively.

There are a few reasons why that has happened to City this season, and some of it was avoidable.

City's own statistics will tell them that Sergio Aguero rarely stays fit for an entire campaign, so they should have had the quality cover to replace him and his goals when needed.

They had it in 2014 when Edin Dzeko was instrumental in their title win with his form in the second part of the season.

This time around they have had to turn to Wilfried Bony, who has had his own injury problems and has not done anywhere near as well as he did at Swansea, and Kelechi Iheanacho, who has done well in fits and starts but is still only a young lad.

Have teams found Pellegrini out?

There have been similar problems with City's creative players - Kevin de Bruyne has been injured and David Silva and Raheem Sterling have not performed to the same levels they did previously.

Another reason they have created fewer chances is that the other teams have improved - you have to give them credit for that, but usually the top sides still find a way through.

I don't think Pellegrini has varied the way City play enough to do that, though.

They are quite one-dimensional when they come forward, which makes it easier for well-organised teams to work out how to stop them.

City occasionally go with two up front but it does not happen enough, especially away from home, where six of their seven league blanks have taken place.

Away struggles and inconsistency

City's away form is particularly worrying - they won their first three away league games of the season, but only two of their next 11.

That has undermined any chance of them building any momentum, and they have not won back-to-back league games for five months.

Under Pellegrini, City have always been a very confident side in the way they set up because, home or away, they expect to dominate teams with the attacking players and match-winners they have got.

It has not worked this season and they have found it a lot harder to score goals on the road.

When that happens, you have to be a bit more defensive-minded and tactically astute to get positive results. Instead, City have remained too open.

It does not take long for opposing teams to sense any vulnerability - to use United as an example, there is no fear factor at Old Trafford any more.

With City, especially away from home, other teams now know they are beatable - they go into games thinking they can get at them and knowing one goal might be enough to win. 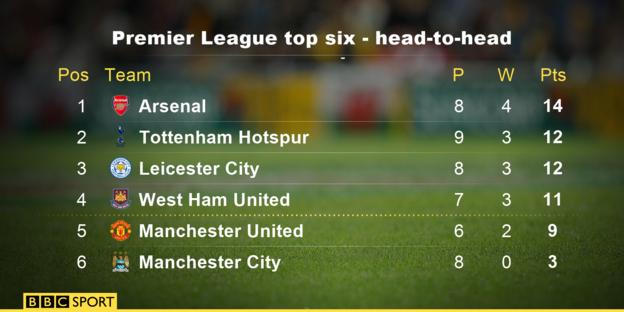 How you get on against the other leading teams is usually extremely relevant - it was something Arsenal in particular struggled with in years gone by.

City are usually strong in those games, but this season they have been poor.

They have a chance to get their first win against another team in the top six when they play United on Sunday and anything else would mean their title hopes are definitely over.

Some people are saying they are finished anyway, and I agree up to a point because they would have to go on an amazing run to be champions, and their form so far this season does not suggest they are capable of it.

A top-four place is also far from secure and, with Pep Guardiola replacing Pellegrini in the summer, it would be a catastrophe for City if they fail to qualify for next season's Champions League.

For the good of the club, to keep moving forward, they will need it as a carrot to attract the top players.

They are still in it this year, of course, but when you consider the calibre of the other teams they are up against, there is no way they should be relying on winning it to make it back in.

So I would be amazed if they did not pull their finger out between now and the end of the season and get the results that cement a top-four Premier League place.

If they don't, the timing of the announcement at the beginning of February about Guardiola's appointment is no excuse.

I have been in similar situations and if anything it had a positive effect. In any case, it is naïve to think it could have been kept under wraps if the club had not made it official.