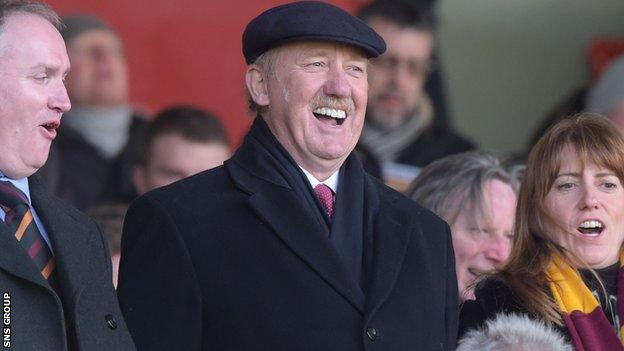 Les Hutchison's involvement at Motherwell has ended before he expected it to.

The initial plan was to pass ownership to supporters' group Well Society in five years, but instead it has taken 14 months for the handover to be agreed.

This was always going to be the final outcome, since Hutchison was never interested in owning or running the club long-term.

For him, a Lanarkshire boy whose business career took him abroad and eventually into a life of significant wealth, the point was to contribute to his local community.

Challenges remain, though, even if Hutchison believes much of the hard work has been carried out.

The significant progress is that costs have been cut, that investments have been made on infrastructure projects at Fir Park and on improving the chances of the football side of the business contributing to self-sustainability.

Hutchison is satisfied that in agreeing to sell his 76% shareholding for £1 to the Well Society, he has paved the way for stability and fan ownership.

If there is a message from Hutchison, it is that fans and local businesses need to step up to support the club financially, so that it never needs to be reliant on wealthy individuals or investors.

"I can't speak to the future of any business, whether it's secure or otherwise, but if they have enough customers and they follow the strategy which has been implemented, we've significantly improved the probability of success," Hutchison told BBC Scotland from his home in Barbados.

"[The club] is extremely close [to break even]. In recent months, the player budget has been reduced dramatically, we've been able to sign some really excellent younger players on longer-term contracts, which reduces costs because you don't have to buy a much more experienced player, we've significantly reduced the medical bills by the introduction of the sports scientist.

"We could do with a little bit of a boost on the commercial side, but we have that pipeline of young talent coming through which would give the opportunity for additional transfer income.

"What [supporters] need to do is decide whether or not they want to try to make it work and whether they want to step up.

"The second, and probably more important one, is that I'd like to see more local companies participate more effectively with the club and the community."

Hutchison had to address costs at Fir Park since the club was running at a loss.

Motherwell previously used to budget to finish in the top half of the Premiership, which meant that any drop in form had a significant impact on working capital.

That has changed, while 10 players left the club in January, although one of them - James McFadden - subsequently signed a new short-term deal until the end of the season.

Under Mark McGhee's management, the focus is to be on developing young players, and Hutchison is particularly proud that under his tenure, Motherwell have reached the youth cup final for the first time in 30 years.

The challenge, though, is financial as well as sporting. The income streams of football clubs rise and fall over the course of a season, but there is now no wealthy individual on hand to cover any shortfalls that might arise.

The Well Society's membership has plateaued, with some letting their subscriptions slide. The Society needs all of its members to be contributing and for more to join if money is to be raised to support the fan-ownership model.

"People got into a bit of a comfort zone that maybe they don't have to participate, 'it's okay, Les is here, don't worry about it'," Hutchison said.

"From the very outset, I wasn't in the business of wanting to own or run a football club in Scotland, I am a philanthropist and I was trying to help the community.

"The Society have had up to 1700 people who have at some point in time contributed. All it takes is for people who have done it in the past to do it again and a few more, with also the support of local business who really want to support their local communities and customers, they need to step up a bit more as well.

"If that happens, then the thing will be in good hands.

"What [the club] has to do is manage the cash flow. That's the challenge. The cash comes in in peaks and troughs because of the way the league does their financing and the way that sponsors pay their money, and TV and so on.

"If they could build up some reasonable reserves, they can then manage through the peaks and troughs.

"We've been budgeting quite prudently. We've had to take actions to make sure those budgets can be achieved. It all bodes well at this point."

Hutchison has stabilised Motherwell - at a personal cost of £1m - and has now left the supporters with the opportunity, and the challenge, of taking over. For that to happen, the Well Society will need to succeed in a way that it hasn't been able to achieve in the past.