As the Cheltenham Festival draws to a close, two Gloucestershire football teams are involved in a two-horse race of their own.

Cheltenham Town are two points ahead of rivals Forest Green Rovers at the top of the National League, with only one automatic promotion spot available.

Third-placed Grimsby are a further 12 points in arrears, too far back it seems to figure in the final sprint for the finishing line.

With only 20 miles between them, BBC Sport takes a look at the two West Country promotion hopefuls.

Manchester United v Liverpool, El Clasico, the Old Firm derby - while 'El Glosico' might not have the profile of football's most famous rivalries, it has been one of the closest this season.

The two sides have been inseparable in the league, drawing 2-2 at the New Lawn in September and 1-1 at Cheltenham two months later.

With so much at stake, there might perhaps be some bad blood between the clubs - not so, according to Cheltenham manager Gary Johnson.

"I think both teams have been respectful towards each other because we're trying to achieve the same thing," he told BBC Sport.

"For me, the best scenario would be that both teams would go up, that'd be good."

His view is echoed by Rovers' former Birmingham City and West Brom midfielder Darren Carter, who spent the 2012-13 campaign at Cheltenham.

"It's been great this year for Gloucestershire football that we both have been battling to get into the Football League," he said.

"We want to go up automatically and it'd be nice to see Cheltenham go up through the play-offs."

Cheltenham - blazing a trail in front

Cheltenham received some gentle mockery when they renamed their Whaddon Road home as the World of Smile Stadium in July, but Johnson's side have given fans plenty to grin about.

Having suffered relegation after a 16-year stay in the Football League last season, the Robins went 22 games unbeaten between September and March, beating a club record set in the 1994-95 season.

The team has been completely rebuilt for the new campaign, with 23 players signed on loan or on permanent deals.

"Myself and my brother Pete, our chief scout, made sure that we started very early, and we were writing names in the sand on holiday in the summer and thinking about who we could bring in," Johnson said.

"They all knew that what we had to do was win the league.

"I think people that didn't feel they could take that pressure probably turned us down.

"So we had that group that had confidence in me, in themselves and in our club to produce what we were saying - that was a big thing." 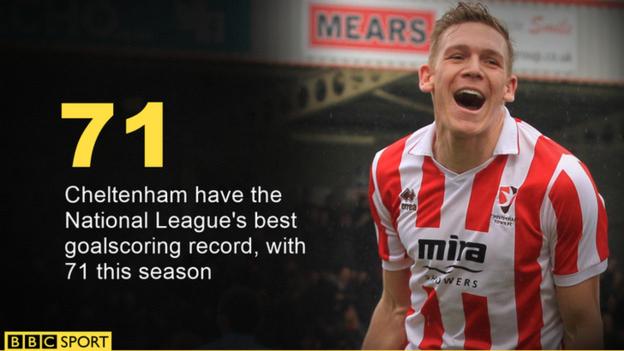 Despite being unable to stave off relegation after being appointed on an interim basis in March 2015, former Bristol City and Yeovil boss Johnson was given a two-year contract.

"I've known a few of our managers by being involved with the club over the years, but Gary is probably the best or one of the best we've ever had," fan-elected director Clive Gowing said.

"He's not a man who panics, he's very level-headed and he's certainly bought into the whole ethos of the club.

"If we do end the season the way we want to end it, massive credit must go to Gary."

Forest Green - coming up on the rails

Owned by Dale Vince, a multi-millionaire environmentalist and former new-age traveller, Forest Green are not your average football club.

They have taken pies and burgers off the menu as the world's first vegan football club, and plans are in place for a £100m 'Eco Park' to house a new 5,000-seater ground.

"It's a different experience, but it's a very friendly club as well and the chairman does a good job of making everyone feel welcome," Carter, who joined Forest Green after being released by Northampton, told BBC Sport.

"The ambition at the club isn't any different, it's just there's things that go on around the club and off the field that are a lot different."

Ady Pennock's side made the Conference play-offs for the first time last year and set a fifth-tier record by winning nine games to start this season.

It has been quite a turnaround by a club which was relegated in 2010, but reprieved when Salisbury were demoted for a breach of financial rules.

"We've already eclipsed the most points the club's ever got at this level," Carter added.

"I think 79 was the previous total and we're on 81 now. We're going to hopefully finish the season the highest that the club has ever finished, and hopefully do something that's never been done and get the club into the Football League.

"It's a big incentive for us as players that we can take the club somewhere it's never been and have a little bit of folklore of our own for the club."

With eight games to go, the final charge for the line has begun - and there can be no dead-heat.