Claudio Ranieri says his Leicester side are "on the home straight" after the Premier League leaders beat Crystal Palace to go eight points clear.

Second-placed Tottenham can narrow that gap to five points on Sunday by beating Bournemouth, after which both teams will have seven games remaining.

"We have to be focused," said Ranieri.

"Sometimes I've said we are at the last turn and now we are on the final, home straight. Now I want to see my horses, how they run."

Riyad Mahrez turned in Jamie Vardy's cross to see off a stubborn Palace side at Selhurst Park, where Leicester fans saw their team, now odds-on for the title with all the major UK bookmakers, pick up a third successive victory.

The Foxes supporters sang "we're going to win the league" solidly for 15 minutes after the final whistle, and it took repeated announcements from the stadium announcer to persuade them to leave.

"Our fans are singing a very good song but we have to stay calm," added Italian Ranieri.

"I remember at the start of the season. I have not forgotten. The goal was to save the team and now everybody is speaking about us. Not only in England, all over the world.

"Everyone is pushing behind us and that is a great energy that we feel. If in the end someone is better than us, we still had a fantastic achievement."

"We are down, frustrated, we wanted to keep momentum after the FA Cup win over Reading but Leicester are top of the league for a reason," he conceded.

"They have a lovely balance to the team. They will be difficult to catch and would be worthy champions."

"Claudio Ranieri is quick to get off the pitch, he shows his respect to the supporters and he lets his players get on with it.

"It's about them, it's not about him. That shows what Leicester are all about. Ranieri wants to free himself of all the limelight, he wants his players to take all the plaudits. 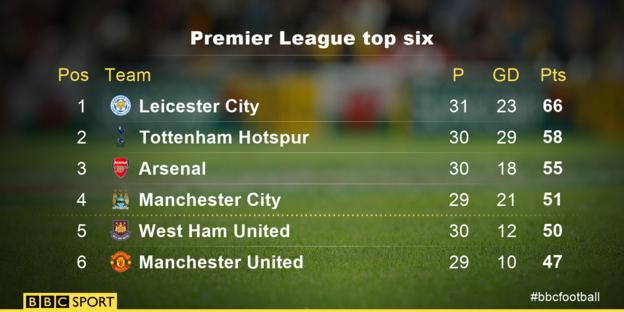