Rafa Benitez is a great manager but he is not a magician, which is why it is going to be touch and go whether he can keep Newcastle up.

That is not a surprise because Benitez is managing the same players as his predecessor Steve McClaren, so they are going to have the same issues.

The Spaniard took over on 11 March with the team in the Premier League relegation zone for two basic reasons - they concede too many goals, and they find scoring them very difficult.

Benitez's task is to make Newcastle more solid, but also increase their creativity and goal threat.

At this stage of the season, with so few games left, it will be a big, tough job for him to turn all of that around.

'My hope is Mitrovic's goal will spur him on'

Sunday's Tyne-Wear derby draw with Sunderland was a game between two poor teams - one of them looks almost certain to get relegated, and both of them could end up going down.

Newcastle deserved a point but, for the first hour, I did not think they played particularly well at all. They did improve, and started moving the ball around quicker, but they had to work hard just to get a 1-1 draw from a game they needed to win.

The most encouragement I took out of the game was about Magpies striker Aleksandar Mitrovic, and that the bit of confidence he will get from his goal might spur him on to get a few more before the end of the season.

I am not holding my breath, but that is what I am hoping for.

Sunderland are down at the bottom of the table too because they have their own problems, but one of the things they do have is a finisher.

After scoring their goal at St James' Park, Jermain Defoe now has 12 Premier League goals this season. They have earned his side 11 points, or 42% of their total.

That is massive for a struggling side. I interviewed Jermain for The Sun last week and I know how important he is to Black Cats boss Sam Allardyce because he will keep getting him goals.

Newcastle had already given him two chances before he scored, so it was criminal to give him a third - I knew he would take it and it was a very good finish.

Canaries defeat would be curtains for Magpies 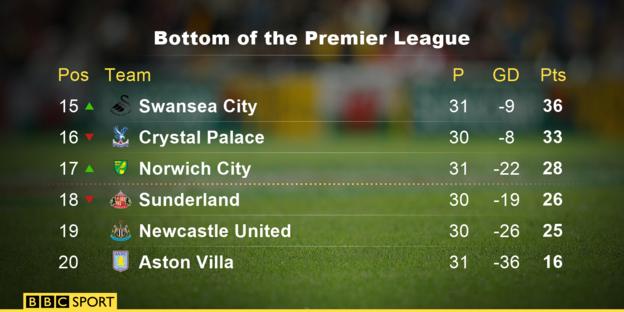 Sunday was a big occasion for Benitez's first home game in charge anyway because it was Sunderland and because of what had happened the last few times they met - Newcastle had lost the previous six.

After being 1-0 down with seven minutes to go, it is a positive that Benitez has got his first point on the board, but he has got another gigantic game coming up when his side play Norwich after the international break.

The Canaries will go into it full of confidence after two clean sheets on the spin and four points from their past two games against West Brom and Manchester City.

Losing to Sunderland would have been bad enough as it would have left Newcastle four points adrift of safety - but the Magpies simply cannot afford to be beaten at Carrow Road.

If they do lose, it is probably curtains for their survival hopes. The Canaries would be six points above them.

It will be the same when Sunderland go to Norwich on 16 April. After those two games, we will know a lot more about each team's survival chances.

'Nothing has changed at the bottom - it's two from three'

Norwich were the big winners this weekend because they got a great victory at West Brom, but it will not always be like that - I am expecting different teams will have the better result week to week.

Looking at the bigger picture, nothing has changed at the bottom. Crystal Palace lost again but one more win will probably put them safe.

Aston Villa are as good as down, so it is still any two from three teams - Newcastle, Sunderland and Norwich - who will go with them.

Am I positive about Newcastle's chances? No. But, if you asked me the same question about any of those three sides, my answer would be the same.

I don't think a fan who supports any of them could say with any confidence that they are staying up.

This is a relegation battle that is going right to the end and it is going to be very tight.