England finished with 10 men but maintained their unbeaten record in qualifying for the 2017 European U21 Championship with a draw against Switzerland in Thun.

Arsenal's Chuba Akpom scored the opener after the break when he slotted home after a dazzling run from Demarai Gray.

England looked in control before a Swiss counter-attack led to Florian Kamberi's equaliser.

Midfielder Jordon Ibe was sent off in injury time for his second yellow card.

The dismissal followed a delayed reaction from referee Daniel Siebert, who had not realised the Liverpool youngster - on as a first-half substitute - had already been booked in the 56th minute.

The result means Gareth Southgate's England keep their three-point lead at the top of Group Nine with three games remaining. 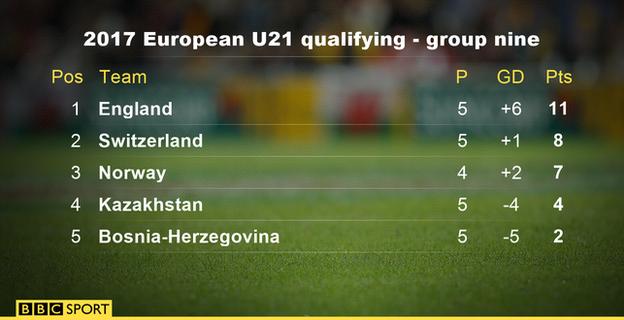 The nine group winners qualify automatically for next year's tournament in Poland, along with the four best runners-up.

England were 3-1 winners over the Swiss in the reverse fixture in November and should have taken three points this time around.

Debutant winger Gray caused the hosts plenty of problems in the first half, but Chelsea pair John Swift and Ruben Loftus-Cheek both failed to convert from his crosses.

Gray's good work was eventually rewarded when he pirouetted past two defenders and fed Hull loanee Akpom, who finished from close range.

Some last-ditch defending from Nico Elvedi denied Akpom a second and the Swiss, who had hit the bar in the first half, raced forward, with Kamberi finishing low into the bottom corner to equalise.

Switzerland now sit second in the group, one point ahead of Norway who have a game in hand.

England return to qualifying in September against Norway, before final group games in Kazakhstan and Bosnia-Herzegovina.