Remember when Luis Suarez was the most vilified man in football?

When the Uruguay striker bit the shoulder of Italy's Giorgio Chiellini during a group game at the 2014 World Cup in Brazil, it sparked a frenzy.

Twenty months later, the drama has subsided. Suarez is now making headlines as one third of Barcelona's potent strike force.

Luis Suarez scored a second-half equaliser for Uruguay in a 2-2 draw with Brazil, his first competitive international since he was banned for biting at the 2014 World Cup.

The 29-year-old scored a second-half equaliser for Uruguay in a 2-2 draw with Brazil on Friday, for the first time since receiving a nine-game ban. BBC Sport looks at his evolution during his absence.

'A dangerous mind that can never be rewired'

Even before the World Cup in 2014, Suarez was no stranger to controversy - or biting his opponents. At Ajax, the striker had chewed on PSV's Otman Bakkal. At Liverpool, he had done the same to Chelsea defender Branislav Ivanovic. During his time at Anfield, he also received an eight-game ban after being found guilty of racially abusing Patrice Evra, then with Manchester United.

The Chiellini incident stoked the fire.

BBC Sport's story attracted a record 3.2m readers, while more than 107,000 tweets per minute were sent in relation to the incident. The UK's newspapers did not hold back in their condemnation of Suarez's actions.

The denial, the apology, the Anfield exit

At first, the Uruguay camp went into lock-down and refused to accept the bite had happened. It was even suggested the whole event was an English media witch-hunt against the Liverpool striker.

However, Suarez issued a statement four days later admitting he had bitten Chiellini and "deeply regretted" the incident. A four-month ban from footballing activity followed.

Three weeks into his suspension, Suarez left Liverpool, with four years remaining on his contract, and made his £75m move to Barcelona.

When Suarez was presented as a Barcelona player in August 2014, he revealed that he was seeking help from a psychologist to prevent him from biting in the future.

Alongside this, Barca president Josep Maria Bartomeu said he had never had any doubt about signing Suarez, who the club had targeted for months, after his actions at the World Cup.

"It's a classic way of responding to a crisis," according to brand expert Alun James, managing director at Four Communications.

"When someone does something wrong in a public place, they go through an apology. You need to say 'I've let myself down', while getting others to put perspective around it. You then demonstrate action to improve the situation.

"The thing to then do is keep out of trouble." 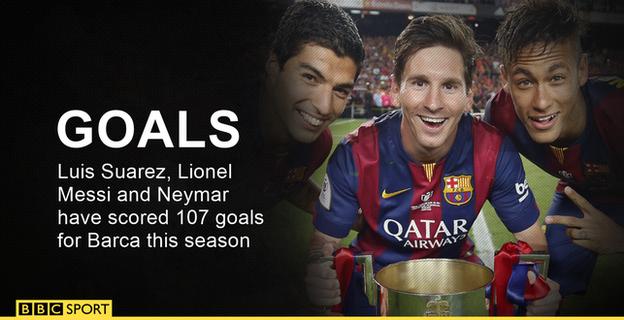 Suarez completed his four-month ban and was finally able to make his Barcelona debut in a 3-1 defeat by Real Madrid on 25 October 2014. And soon, the La Liga club's now famous three-pronged attack was firmly established.

Alongside Argentina's Lionel Messi and Brazil's Neymar, the trio - nicknamed MSN - led the Catalans to the treble last season with 122 goals in all competitions.

This season, Suarez has added 43 goals to his own personal tally. And no biting to report.

A new improved Suarez, then?

Suarez has addressed his controversial past in several recent interviews, and has said he wants to be remembered for his goals, rather than the "bad things".

Speaking before Uruguay's game with Brazil in Recife, Suarez said: "I am going to have the same attitude. I will still run, still pressure, still argue but with moderation, like I am doing now at Barcelona."

But will the general public be able to forget about his much-publicised past?

"This is a really talented guy, so people can rationalise this behaviour. People are also able to distinguish the crimes. Biting someone's shoulder is slightly ludicrous, whereas if someone's involved with a court case, that's more shocking and harder to forgive."