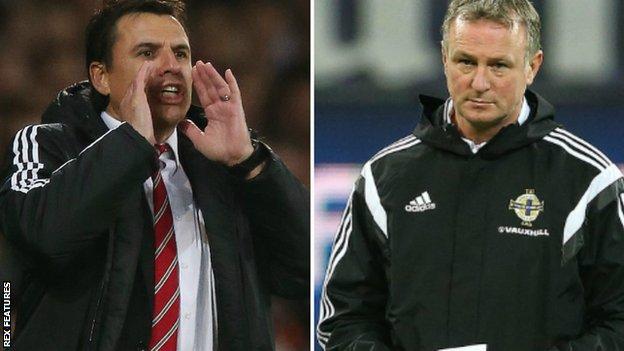 Wales will be without several first-team players for their Euro 2016 warm-up match against Northern Ireland - but manager Chris Coleman still expects a full-blooded derby.

Northern Ireland are without defender Chris Baird and midfielder Chris Brunt, who will miss Euro 2016.

But Coleman says: "It will be a bit feisty and that's what we want."

He added: "When we play each other we don't want to lose to a neighbouring country.

"I know Michael and I know the mentality of Northern Ireland. They won't be wanting to come here thinking it is just a little warm-up game before the tournament."

Wales' talismanic forward Bale was left out of the squad in a joint decision between the Football Association of Wales and his club Real Madrid.

Ramsey, James Collins, Andy King and David Edwards are out through injury and illness, while Neil Taylor is rated as doubtful having missed Swansea City's 1-0 win over Aston Villa because of a dead leg.

Their absences could create opportunities for the likes of Leicester forward Tom Lawrence, currently on loan at Cardiff City, and Liverpool goalkeeper Danny Ward, who is expected to make his debut against Northern Ireland.

"We've got a few missing but that gives us a chance with some of the other lads that have either had no experience before or very little," said Coleman.

"When we picked this squad and we had quite a few pull-outs it wasn't that disappointing because we get to see one or two new faces, and they'll get their chance."

Queens Park Rangers striker Washington, 23, qualifies through the grandparent rule and used to play for Peterborough and Newport County.

The absence of so many familiar names could mean experimentation is a common theme for Wales and Northern Ireland at the Cardiff City Stadium, with both teams preparing for this summer's European Championships.

The competition in France will end two long waits for an appearance at a major tournament - 58 years for Wales and 30 for Northern Ireland.

For Wales, this will be another opportunity to adapt to life without Bale and Ramsey, as they did in November's friendly defeat to the Netherlands.

With uncapped striker Washington in their ranks, Northern Ireland will be hoping to improve a dismal recent scoring record in friendlies.

They have scored only one goal in their last 17 friendlies away from home, a run stretching back nine-and-a-half years.

Goals from Aaron Ramsey and Robert Earnshaw earned Wales a comfortable win over Northern Ireland in a Nations Cup clash in Dublin.