From the brink of oblivion to winning promotion.

A familiar tale, but one rarely told from start to finish in only 135 days.

That is the story of Northampton Town's season, however, after their 2-2 draw with Bristol Rovers on Saturday made them the first Football League side to win promotion in 2015-16.

Four months earlier, a much unhappier ending looked the most likely to be written.

Back in November, outstanding repayments on a £10.25m loan were being called in by the Borough Council as they petitioned for Northampton Town to be put into administration.

Now, that's a lot of money. Enough to pay the annual fuel bill for 7,900 people - a sold-out Sixfields Stadium. Ironic.

Ten million. It wasn't a figure you could escape from around Northamptonshire, indelibly etched on the psyche of every casual observer as much as the 20-minute Wembley capitulation against Bradford in 2013 is on the minds of Cobblers fans. Adebayo Akinfenwa couldn't save Northampton then and, try as he might, he couldn't now.

But, in actual fact, it was the much smaller £166,000 tax bill and consequent winding-up hearing that presented the real danger. With Northampton Town's bank account frozen, there existed an imminent threat of oblivion.

No football team, no commentator

When I accepted the role of Northampton Town commentator for BBC Radio Northampton in February 2015, this wasn't exactly what I had in mind, if I'm honest.

Plenty of supporters made sure they told me straight that I too would be out of job if the Cobblers went bust. Brackley, Corby, Kettering, AFC Rushden & Diamonds and Daventry would have been the alternative in reality. But, with respect, the job description at BBC Radio Northampton had said "patch contains only English town with professional cricket, rugby and football".

I've never liked being dragged around the shops on a Saturday afternoon. Luckily for every Northamptonian, I don't think Chris Wilder has either - a veteran of 700 managerial games, not forgetting the long playing career in his younger days.

Cue an impassioned five-minute pitchside rant at Notts County, during which he said the off-field problems were "tearing us all apart". Trust me, it really was more soliloquy than interview. I tentatively held out that microphone, just far enough away to feel safe - well, safeish.

"I get pulled up about that a lot," grins Wilder. "It'll stick with me for a long time, possibly as long as I'm in football management.

"There's a time for honesty in football. That was one of them."

It's certainly something I'll never forget. A manager publicly speaking out against his employer takes real courage. But, moreover, that person has to really care about their football club. Supporters value passion and commitment almost as highly as results - and that's what makes this season extra special for Cobblers fans.

"We'd kept quiet for a long time, possibly far too long," explains Wilder. "People weren't getting paid, so I spoke for the players and staff, hopefully the supporters as well. There was a great reaction.

"Obviously, things moved on very quickly after that and if I played a little part in it, then great."

That comment from Wilder is something of an understatement. Forty-eight hours later and former Oxford United chairman Kelvin Thomas had agreed a takeover from David Cardoza. Wilder's players then stepped into another gear - and they've lost just one league game since.

The defeat, inflicted by Portsmouth, had no effect on the Cobblers, who then won 10 in a row, equalled a fourth tier record of eight successive away victories, and are now unbeaten in 19 games. 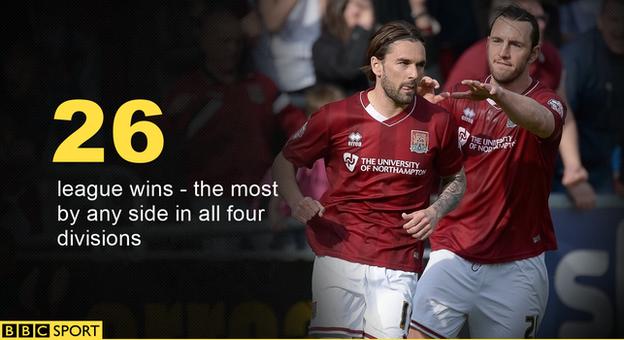 Such form has ended a decade-long wait for promotion. Back then BBC Radio Northampton summariser Lee Harper was in the Cobblers goal.

"I remember the adulation after beating Chester City to go up, that's the overriding memory of what was a fantastic season," said Harper. "This season, when I did my first game away at Barnet in August, I never saw this coming.

"From the start, I thought they'd go close because there was quality in the team, but with all the turmoil going on off the pitch, it didn't look like it would go their way.

"But the fans' reaction to it all is what's galvanised the club - and not just the club, but the whole town of Northampton. I have to be honest, I don't think anyone envisaged this."

The Cobblers are the highest goalscorers in League Two with 75, and have scored three or more goals a staggering 14 times in all competitions this season, drawing a blank in just five of 48 matches.

"The side I played in and Chris Wilder's are very different," added Harper. "Under Colin Calderwood we were very defensively strong and set up to be difficult to beat.

"I mean we had some good players, but this team at the moment, it's really offensive football. They just score goals for fun, and play with a real style - it's been a pleasure to watch them this year.

"Our achievement was great, but people only remember champions, and this current Cobblers team deserve that. They deserve to be remembered for what they've achieved this season, especially given the circumstances they've achieved it in."

Long before 'doomsday' at Meadow Lane on 21 November, Sixfields wasn't the happiest of places. A home defeat by Dagenham left Northampton Town 16th on the first Saturday in September, already eight points off the pace.

Supporters demonstrated against the ownership the following weekend, and the lack of progress on the unused, concrete East Stand at the ground - it was a development 18 months behind schedule.

Two thousand claret and white seats are open for business there now, while three wins will see Wilder's side pass the haul of Graham Carr's 1987 Cobblers team to join York, Swindon and Plymouth as fourth-tier centurions.

'No big interview this time'

"It's been an unbelievable effort," said a proud Wilder.

"Everybody in and around the club during that difficult period deserves enormous credit. To think the players kept up great performances, and staff got on with their jobs while not getting paid is phenomenal.

"It'll just be great if we can put the icing on the cake and add a title that we really deserve. No big interview this time though - I'll have my head in the fridge."

I think he's earned that beer. A BBC Radio Northampton interview is in the contract though Chris. I'll be sure to keep a safe distance.

70 comments
Back to top
unknown