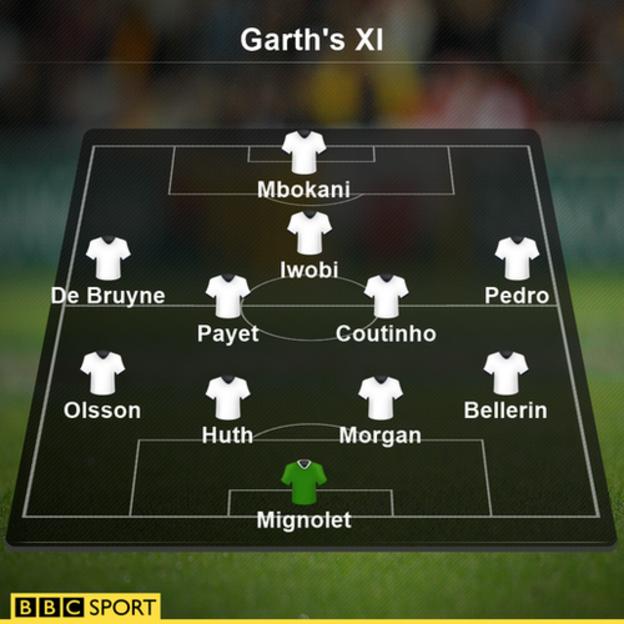 Leicester's fairytale grows ever closer to becoming a reality after they beat Southampton to extend their lead at the top of the Premier League to seven points.

Tottenham slipped up and had to come from behind to claim a draw against Liverpool at Anfield, while Arsenal turned the style on with a 4-0 thumping of Watford.

The chase for a Champions League place is heating up as Manchester City stay one point ahead of rivals Manchester United, but West Ham could only draw against Crystal Palace.

Two fabulous saves by the Belgian gave Liverpool a valuable point and kept the Merseysiders on course for a European spot. The first was a brilliant second-half save from Christian Eriksen, before an even better stop from Mousa Dembele as Spurs went looking for a winner in the final minutes of the game.

It's a reflection on Tottenham's progress that they can go to Anfield these days expecting to take all the points and, had it not been for Mignolet, they would have done so.

I just love full-backs who like to get into the mix and Hector Bellerin seems to be doing that an awful lot these days. He originally lost the ball to Watford's Ikechi Anya but then through sheer persistence won it back before he and Alexis Sanchez manipulated a situation that cost Watford dearly.

On their day, Arsenal can compete with the best and brushed Watford aside in what was a rather predictable outcome. However, if Bellerin and his team-mates harbour serious intentions about winning the Premier League title, they must shed their inhibitions, particularly in front of their home crowd - and play without fear.

Metaphorically speaking, Arsenal are chasing the pack having stumbled and now must do something pretty spectacular to win the race. The question is, do they have what it takes to beat Leicester and Spurs to the finishing line?

It was only "a bit of a push" that led to Wes Morgan's winning goal against Southampton, said former Manchester United goalkeeper Peter Schmeichel. It was a clear push and referee Michael Oliver should have seen it.

Similarly, Southampton were entitled to a penalty when Sadio Mane rounded Kasper Schmeichel only to see Foxes full-back Danny Simpson clear the ball off the line with his arm. At this point, Leicester should have been down to 10 men. Two major calls have put Leicester City in an unprecedented position - but you can't blame Morgan or Simpson for that.

Robert Huth and his accomplice Captain Morgan are like two towering infernos, both of whom were magnificent against Southampton and defended like champions. Leicester are now seven points clear and four wins away from lifting the Premier League title for the first time in their history. How wild is that?

Before Saturday, the last time this lad scored a goal was September 2014. Martin Olsson's winner against Newcastle created scenes the like of which I haven't seen at Carrow Road for years. The full-back's strike was, under the circumstances, quite brilliant. I have seen top players mis-hit or just screw a shot wide when so much is at stake.

These were three mighty points for Norwich but I must confess, I sit in the camp that insists their winning goal should never have stood. The ball hit Norwich midfielder Jonny Howson's hand, allowing him to control the ball sufficiently for Olsson to finish. That said, football is a game and not a science and luck should play its part in all good matches.

The beneficiary of all this nervousness was Pedro, who went about his performance oblivious to the angst at Villa Park. To be fair, there were a number of notable performers, including midfielder Ruben Loftus-Cheek and striker Alexandre Pato, but there can be no doubt that Pedro was the star of the show.

It was an exceptional finish by Philippe Coutinho to put Liverpool 1-0 up against a Tottenham side who might have nicked this game in the end. In fact, I don't think I have ever seen the Brazilian score what can be described as an ordinary goal for Liverpool. The reality is that Coutinho could have had a hat-trick against Spurs.

His shot that flashed across the goalline could have put Tottenham's title challenge to bed and so could his effort that fizzed past the post in the final minutes of the match. No wonder Mauricio Pochettino punched the turf in despair at the final whistle. The Spurs manager knew all about Coutinho from his time with him at Espanyol but he still could not stop the Brazilian from putting an enormous dent in Tottenham's title challenge.

I have seen Dimitri Payet's goal a dozen times. It gets better every time I see it! Yet, what should have been a fantastic winner for West Ham, became nothing more than a contributory factor in an afternoon's work against Crystal Palace because of referee Mark Clattenburg's poor judgement.

What was no more than a routine infringement at best by Cheikhou Kouyate suddenly constituted a sending-off. Aston Villa defender Alan Hutton's tackle on Chelsea midfielder Loftus-Cheek was reckless and deserved to see a second yellow card but Kouyate's tackle on Palace striker Dwight Gayle deserved nothing more than a sharp rebuke.

The fact that Kouyate went into the tackle showing his laces and Hutton with his studs showing is enough to tell referees all they need to know about what is dangerous and what is not. Payet's moment of magic gave us all so much joy and then Clattenburg conspired to take it all way.

Oh how Manchester City have missed this lad. Kevin de Bruyne scored what can only be described as a finish of the highest quality in order to put this game well beyond Bournemouth. The combination of Sergio Aguero, David Silva and De Bruyne for the Belgian's goal was simply exquisite.

I am convinced he could have added to his tally had manager Manuel Pellegrini not substituted the midfielder after an hour in readiness for their Champions League fixture in midweek against Paris St-Germain.

The conceding of three goals in 18 minutes suggests that Bournemouth are psychologically shot to pieces having achieved the monumental tally of 38 points in the Premier League. Frankly, I'm not surprised.

This performance by Arsenal was more reminiscent of a side brimming with talent but who suddenly found the grit and determination to go with it. Alex Iwobi was the stand-out player in this match and it was he who provided the opening for Sanchez to score the first goal. However, it was Chile international Sanchez who returned the compliment for the youngster when he converted his second goal in his second league start for Arsenal.

German playmaker Mesut Ozil made it perfectly clear this week that he thought that Arsenal have "screwed it up" but if the Gunners were to win the remainder of their games and Iwobi keeps scoring goals, then the title is very possible.

Fortunately, Dieumerci Mbokani survived the horrific attack in a Belgian airport when a bomb exploded last week while en route to play for his country in the Democratic Republic of Congo. The African striker returned safely to Carrow Road and played superbly against Newcastle.

He had a first-half goal disallowed after a super ball by Howson and then a shot brilliantly saved by the relatively unknown goalkeeper Karl Darlow. At this point, I thought his luck had run out but he suddenly cut inside and fired a fearsome shot that flew into the net for a thoroughly deserved goal.

It has helped put Norwich on course for Premier League survival.