Voting closes on Friday for the Professional Footballers' Association Player of the Year award.

So who should be on the six-man shortlist when it is announced on 14 April? And who will succeed Chelsea's Eden Hazard as the winner?

Scroll down to see who they have picked as their best player.

"If Harry Kane goes and scores six goals in Tottenham's last six games and they win the title, then it is him. If Jamie Vardy does the same for Leicester, he gets it.

"But if the season ended now, when the votes are being cast, I would go for Riyad Mahrez.

"He has brought brilliance and unpredictability to Leicester's title bid, and has been superb in terms of scoring goals, and making them." 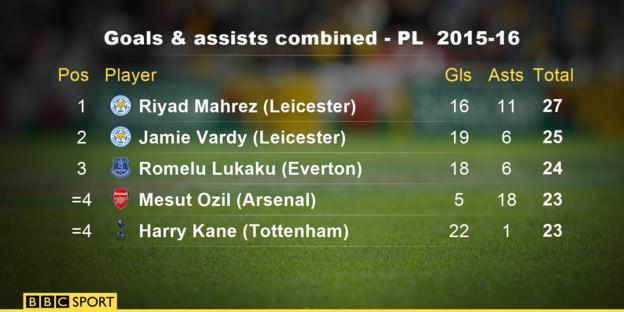 Waddle: "I have always felt the vote was too early, going back to when I was a player.

"That's why I think Arsenal's Mesut Ozil will figure this year because when voting started he was on fire, even though he has gone off the boil a bit in the last few weeks.

"The award should reflect performances over the whole season, which is why a Leicester player should get it.

"As a Premier League footballer, Mahrez has basically come alive this season after showing a few glimpses of his ability at the end of 2014-15 when Leicester avoided relegation.

"My other contenders come from clubs near the top, apart from Willian, who has had a fantastic season even though Chelsea have been terrible. He is their only player to get close to the level he was at when they won the title last season."

Sutton: "I am a big fan of Robert Huth's old-fashioned defending, although I could easily have picked his team-mate Wes Morgan instead.

"Jamie Vardy has been absolutely sensational and is a far more intelligent player than people give him credit for. Yes he is fast and works hard, but the timing of his runs is terrific and we know he can finish.

"There are strong arguments for Vardy or Mahrez to be player of the year but, for me, Dimitri Payet has had the 'wow' factor.

"Payet cost West Ham just under £11m when he joined from Marseille in the summer. That is just run-of-the-mill money these days so I did not pay much attention to the signing at the time, but he has been a breath of fresh air. 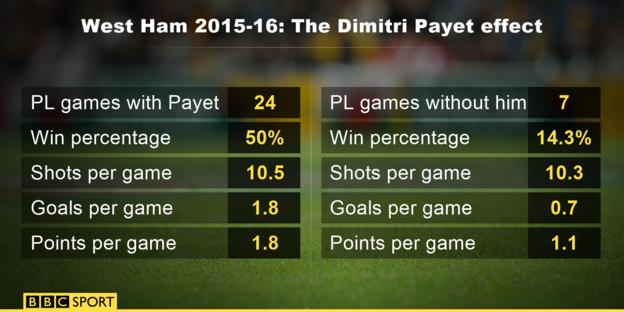 "Watching the way West Ham play with Payet in the team is a bit like being back at school. He is their best player so they give him the ball and say 'make something happen' - and he does.

"He has got that unbelievable eye for a pass, on top of his free-kick ability, and he is one of those players who is a reason why fans buy tickets or turn on the TV.

Jenas: "Arsenal's form dropping off when it did will not have helped Ozil's chances. I still think he has been brilliant, though.

"There were a lot of question marks over him before the season started about whether he was doing enough to justify his £42m fee, so he deserves some recognition for all those assists and how he held the mantle for their title bid for so long.

"Mahrez should take the award, though. If Leicester win the league, it will be because of him.

"Although Vardy has scored more goals, Mahrez has put a lot of them on a plate for him."

Murphy: "What I love about Toby Alderweireld is that he is a superb defender who contributes to Tottenham's attacks too.

"He is so calm in possession and some of his long-range passing has been phenomenal to set Spurs off going forward.

"He has played every minute for Tottenham in the Premier League this season and we have seen how he is more than just a great player, he is a leader and an organiser too.

"Jan Vertonghen does not look as solid when he is playing with anyone else and, when he has been injured, Kevin Wimmer has benefited from playing with Alderweireld too.

"As far as the Player of the Year goes, though, it has to be Mahrez. What he has achieved has been phenomenal.

"Jamie Vardy's performances have been completely unexpected as well but, when you bring in Mahrez's all-round game and the big moments when he has delivered, he would edge it for me."

Mills: "After he broke through last season, nobody was sure Harry Kane could do it again, but he has done.

"What I like about him is that he does not have blistering pace; instead he is a very clever player.

"To score the number of goals he has, two seasons running, and be in line to be the first English striker to win the Premier League's golden boot since Kevin Phillips in 2000, is amazing enough anyway. To do it at the age of 22 is phenomenal." 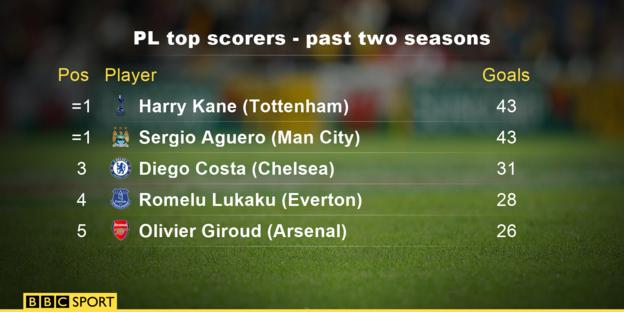 Kilbane: "You could argue a case for so many different players - Romelu Lukaku has scored 25 goals for Everton, so he would get into my six ahead of people like Eric Dier and Alderweireld, who have been so solid for Spurs.

"Different players will have different criteria for who gets their vote - some current top-flight players I have spoken to have given it to the player who played the best against them, while when I had a vote I would have made my decision based on the games I watched too.

"In terms of a winner, it is hard to look beyond Leicester, and Mahrez and Vardy are one and two for me.

"Before Christmas, Vardy broke the Premier League record for scoring in consecutive games but, for eye-catching performances over the whole season, I would go with Mahrez."

Nevin: "Manchester United are where they are in the table because of David de Gea more than any other player and I suspect he will be their player of the year for a third straight year.

"Kane has answered all the people who doubted him and shown he is top quality but Mahrez gets my vote.

"As someone who played in his position it is obvious he could do things nobody else can do. In terms of his stats, his numbers are spectacular but what makes him so special and skilful is more technical than that - he has got a certain balance about him."

Lawro: "Kane did not score in any of Tottenham's first six league games of the season, but since then he has become a brute of a centre-forward and my star of the season.

"He scores every type of goal, from anywhere, and his size, skill, finishing ability, unselfishness and hard work make him stand out at international level too.

"The Leicester trio I have picked in my six are the best individuals in a very effective team unit.

"The front two have scored 35 goals between them - only Kane and Alli get close to that with 29.

"But I just think N'Golo Kante has been a revelation. It seemed to take a little while for everybody to realise what a good player he is.

"Kante has got great pace so he gets to people really quickly to break attacks down, then gets up the pitch too. Danny Drinkwater must love having him as his midfield partner."

"As far as the young player award goes, 19-year-old Dele Alli has to win it.

"He is the outstanding talent to break through in the Premier League this season, and with his attitude and application I think he will get better and better.

"I remember the first time I saw Riyad Mahrez play live, when I went to watch Swansea play Leicester at the King Power Stadium in April last year.

"He did not start the game and only came on in the 68th minute, but he was very influential when he did. I remember thinking 'wow, this guy is special'.

"Mahrez's feet are absolutely magnificent - he can score goals, has got great vision, can carry the ball and is a great athlete. He is the biggest reason Leicester are having such an outstanding season."