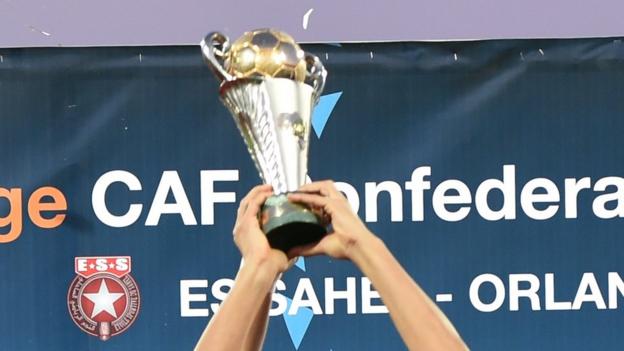 Two goals in as many minutes were enough to see Tanzania's Azam come from behind to beat visiting Esperance of Tunisia 2-1 in the first leg of their Confederation Cup tie.

Haithem Jouini gave the two-time African champions Esperance the lead in the last 16 tie after 33 minutes on Sunday.

Musa Farid scored the equaliser in the 68th minute before and Ramadhan Singano grabbed the winner just two minutes later for Azam.

The overall winners will face the losers from the last 16 in the Champions League in a play-off to qualify for the the group stage.

Angola's Sagrada Esperanca earned a 2-1 win away in Congo Brazzaville over Vita Club Mokanda and there was a 0-0 draw in Sudan between Al Ahly Shandy and Ghana's Medeama.

On Saturday Confederation Cup newcomers Stade Gabesien of Tunisia are look set to earn a play-off place after holding Zanaco of Zambia 1-1 in Lusaka.

Rodrick Kabwe put the Zanaco ahead midway through the first half only for Ahmed Hosny to equalise after the break for Gabesien.

Algerian duo CS Constantine and Mouloudia Oran struggled to cash in on home advantage in other first legs.

Constantine, so impressive when eliminating Nasarawa United of Nigeria in the round of 32, had to wait 89 minutes before Mourad Meghni scored to deliver a 1-0 win over Misr Elmaqasah of Egypt.

Oran had to settle for a 0-0 stalemate with Kawkab Marrakech of Morocco, who had conceded five goals in two previous continental games on the road this season.

On Friday FUS Rabat of Morocco were emphatic 7-0 winners over Uganda's SC Villa in the first leg match.

The victory was bookended by impressive first and last goals as the hosts humbled their cash-strapped opponents who were only able to fulfil the fixture thanks to a financial pledge from Uganda President Yoweri Museveni.

Mourad Batna rifled a left-foot free-kick from well outside the box over the raised right hand of the Ugandan goalkeeper for FUS Rabat's opener on 26 minutes.

Mohamed Fouzair completed the rout at Stade Moulay Abdallah in the Moroccan capital with a solo goal a minute into stoppage time.

He dribbled past four Ugandans to score as 2010 Confederation Cup winners FUS achieved the biggest win in the competition this season, bettering the 6-0 of Wits of South Africa over Light Stars of Seychelles.