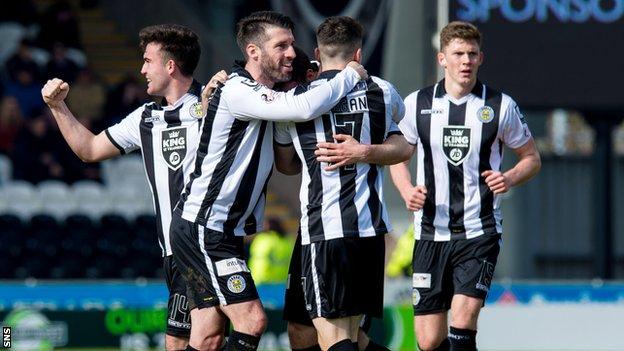 Shankland fired the hosts in front with his 10th goal of the season before Denny Johnstone restored parity just before the hour mark.

Saints added to their lead in injury time as Shankland combined with Cooper to set up Stevie Mallan.

The victory takes Saints to within a point of Morton and boosts Alex Rae's side's chances of finishing fifth in the table with matches against Dumbarton and Rangers to come.

Morton, without a league win against their Renfrewshire rivals since 1999, were desperate to put that to rights as they come to the end of a season which had already ensured Championship survival.

The appeal of the fixture, meaningless outwith the possibility of Morton reaching a points total which would make them uncatchable by St Mirren, was clear with a crowd of 4,299 inside the Paisley 2021 Stadium.

Shankland scored a marvellous opener after just seven minutes, a strike from the edge of the box which flew beyond the despairing dive of Gaston.

The goal locked Saints' grip on the first half. Clarkson, back in the starting line-up, had a chance that he pulled wide. Gallagher shot past the other post - the goalie's left - and Mallan had a free kick saved.

Against all that, St Mirren keeper Jamie Langfield had a relaxing first half in the Paisley sunshine, save for a foot he had to use in an improvised save to deal with a shot from Declan McManus.

At first there was little redirection of traffic after the break despite Morton having spells of good passing. Bobby Barr, for example, was reluctant to release a shot and found himself forced wide to the by-line where his cross was blocked.

The Greenock side lacked a cutting edge but with 59 minutes they sorted that in grand style.

They launched a wonderful counter attack with Declan McManus doing the graft. Johnstone peeled off to his left and into space and McManus delivered the pass. Johnstone composed himself and produced a lovely finish.

However, within two minutes Saints were ahead again. It was sloppy defending by Morton captain Lee Kilday as his clearance landed at the feet of Gallagher who all but passed the ball in at Gaston's left post with a composed finish.

Saints decided to stick with what they had. With 14 minutes to go they replaced Gallagher with Jim Goodwin who took up a sitting role in front of the back four to nurse his team over the line.

St Mirren enhanced the victory with another goal in time added on. Morton were torn apart by Shankland and Cooper who set up Mallan to score. Job done.

Three points which saw them leapfrog Queen of the South and into sixth place in the Championship.