Celtic forward Leigh Griffiths admits he is off penalty duties after missing a spot-kick before netting twice in Saturday's 2-1 win over Motherwell.(Sunday Mail)

And Griffiths says his "focus is Rangers" ahead of next Sunday's Scottish Cup semi-final. (Sun)

Rangers manager Mark Warburton will pick today's team for the Challenge Cup final against Peterhead with a view to next week's tie against Celtic.(Sunday Mail)

Ibrox winger Barrie McKay says the games against Peterhead and Celtic will be the biggest fortnight of his career. (Sunday Mail)

Mixu Paatelainen refused to accept his Dundee United side will be relegated after their latest defeat by Inverness Caledonian Thistle left them eight points adrift at the bottom of the table. (Sunday Herald)

Paatelainen wants to achieve both Premiership survival and Scottish Cup glory, with United due to face Hibernian in Saturday's semi-final. (Scotland on Sunday)

Promotion remains the aim of Hibs head coach Alan Stubbs but he admits ending the club's long wait for a Scottish Cup trophy win would be quite an achievement.(Scotland on Sunday)

Motherwell's Connor Ripley was embarrassed by two man of the match awards after the goalkeeper followed several fine saves against Celtic with a mistake that gave the Premiership leaders a 2-1 win at Fir Park on Saturday. (Sun)

St Johnstone manager Tommy Wright praised his side for the "incredible" achievement of claiming a fifth successive top-six Premiership finish.(Courier)

St Mirren forward Steven Thompson has no doubts it is the right time to hang up his boots as he prepares to retire from playing at the end of the season. (Sun)

Match of the Day pundit Alan Shearer and Manchester United's former Scottish manager Sir Alex Ferguson posed together for a photo ahead of a day watching the Masters at Augusta. Shearer, who famously turned down two chances to move to Old Trafford during his playing career, tweeted "He FINALLY managed to get me in a red shirt." 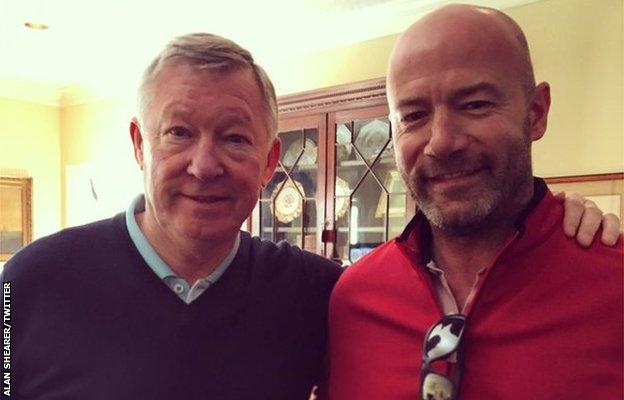