Leicester just keep on winning but, thanks to Tottenham, the Premier League title race is not over yet.

Mauricio Pochettino's youthful side kept alive their hopes by beating Manchester United on Sunday, although they remain seven points behind leaders Leicester, with five games left.

Have they left themselves too much to do? Former Spurs boss Tim Sherwood tells Match of the Day 2 why, even if they do miss out, the foundations are in place for another challenge next season.

Tottenham have now scored the most goals and conceded the fewest in the top flight this season. Only six teams have managed to do that over a full season in the Premier League era, and five of them won the title - Manchester United in 2001 and 2008, Arsenal in 2004, Chelsea in 2006 and Manchester City in 2012. On the other occasion, United finished second in 1998.

Sherwood: "The United game showed again why Tottenham are contenders - when things don't click for them up front, they have got a solid defence to fall back on.

"It meant United only managed one shot on target in the entire game, which saw one of the best goalkeepers in the league - Hugo Lloris - make a great save.

"Then, less than 10 minutes later, Tottenham suddenly turned it on with three goals in quick succession.

"They can do that because they have got match-winners, players who can turn games. I don't think Dele Alli had his best game against United, or Harry Kane, but you still knew they were on the pitch.

"They do not go missing even if they are not playing well and they still affect the game, which we saw with Tottenham's first goal, where Kane started the move and Alli finished it.

"After that they came forward in wave after wave and could have scored even more than three in the end."

'This is not Tottenham's only chance' 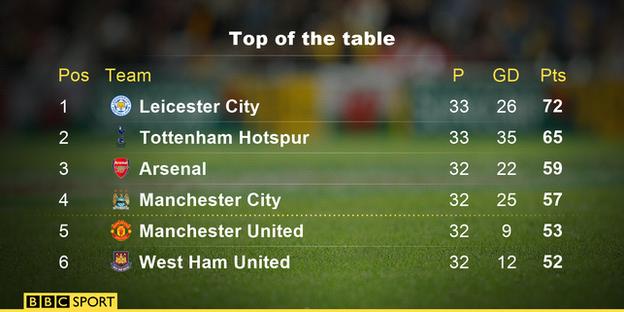 Sherwood: "Even if Tottenham keep winning, this is Leicester's title to lose now - it would take a 'Devon Loch' from Claudio Ranieri's side for them not to win it from here.

"But Tottenham are not making it easy for them. They are breathing right down their neck and, if there is any slip up from the Foxes, they will be right there.

"Part of the pressure on the teams at the top is that Chelsea are out of touch and Manchester United are not looking like the side they used to be.

"Everyone expects them both to improve next year, so this season was seen as a great opportunity for any of the top three - Leicester, Spurs and Arsenal - to win the title, and one that might not happen again soon.

"I disagree as far as Tottenham are concerned. Next year it is going to get harder, that is for sure, but I don't think this season is Spurs' only chance.

"If they don't win it this year, then I think a lot of people would say they will be among the favourites to win it in the future. I would agree with them."

'Why would Kane want to leave?'

"The thing with Tottenham, which makes them different to Leicester, is that they will be able to attract the best players in the world this summer.

"On top of the pull of London, and the fact Tottenham are a big club anyway, there could be Champions League football, as well as the prospect of a new ground and fantastic training facilities.

"They also have a young team with an exciting young manager. Everything is in place, on and off the pitch.

"Harry Kane has been linked with a summer move to Manchester United but why would anyone want to leave?

"Kane has got plenty of time - at 22, he is only a baby. He has been developing at a rate of knots over the last couple of seasons and it looks as if he will lead England's attack at Euro 2016.

"My advice to him would be to stay put. I would tell him you are not at an inferior club anymore - yes, United are massive, but Tottenham are getting there too and he can be a huge part of that."

'More to come from these players' 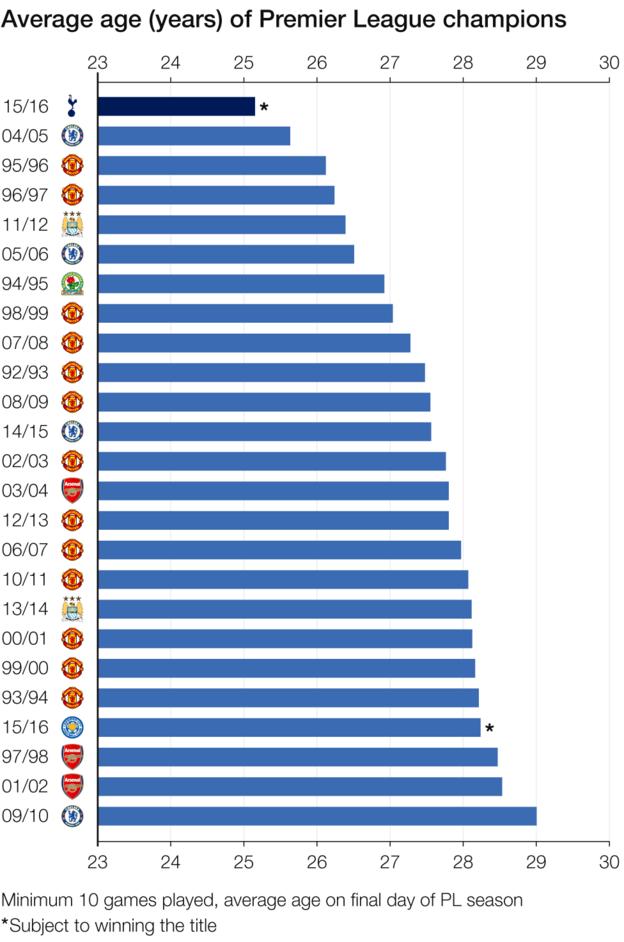 Sherwood: "In Pochettino, they have got a manager who has a lot of faith in young players and a good young squad - at 28, Jan Vertonghen is their oldest outfield player. What I like about Pochettino is how he has brought them along.

"I gave a lot of those players their debuts so he has been able to see them first hand in the Premier League, and see that they can do the job.

"He has stuck with them too. He has not worried about reputations or price tags - he picks his team based on what they do on the training ground.

"Clearly they are hungry enough to prove they should be in the side, but credit to Pochettino for giving them a chance.

"Is there more to come from them? Absolutely."

Sherwood: "On Sunday we saw Tottenham's strongest team - if there was a cup final tomorrow, then this would be the team playing in it.

"Mauricio Pochettino has rotated a lot and has taken a while to decide on his best side, but I think he has found it now, with Jan Vertonghen fit and back in the side.

"Injuries and suspensions aside, I would be surprised if he makes any changes between now and the end of the season, and this will be the basis of his team going forward too.

"His best full-backs are Danny Rose on the left and Kyle Walker on the right and, with Eric Dier sitting in front of the back four, it gives them solidity they need. That allows Dele Alli, Christian Eriksen and Erik Lamela to go and do some damage.

"The youth he has in his squad means they have the energy that is such a big part of the way they play.

"In the last 20 minutes against United, they could step it up. They produced that burst of goals that just blew United away, while Louis van Gaal's side never had that in the locker.

"Like Leicester, Spurs are built on defensive discipline and teamwork, so it should be no surprise that both teams are having such successful seasons."