Tottenham produced an outstanding display to thrash Stoke and move five points behind leaders Leicester with four games of the season remaining.

Harry Kane's sublime curling finish, his 23rd Premier League goal of the season, set them on their way before Christian Eriksen hit the crossbar.

Dele Alli doubled the lead before he hit a post when it was easier to score.

Kane rolled in the third before Alli's right-foot volley wrapped up Spurs' ninth away league win of the season.

The result lifted Mauricio Pochettino's side to 68 points from 34 matches, with Leicester on 73 from the same number of games.

Relive the action from the Britannia Stadium

Listen to BBC Radio 5 live commentary of the goals

'Leicester City - we're coming for you'

Tottenham's travelling fans at the Britannia Stadium chanted "Leicester City - we're coming for you" after Alli's chip made it 2-0.

Had Spurs lost, Leicester could have been champions next Monday, but the visitors were in control from start to finish as they turned on the style on what could be a pivotal day in the race for the title.

After the Foxes' leading scorer Jamie Vardy was left facing the possibility of an increased ban after being charged with improper conduct by the Football Association, Stoke were blown away by a dynamic and aggressive display as their north London opponents showed no signs of pressure.

Eriksen was involved in three of the four goals, Kane has now scored more Premier League goals than relegated Aston Villa this season, and Alli is in double figures.

Tottenham have the best attack (64 goals) and the best defence (25 conceded) in the Premier League this season and there is a feeling their title charge is gathering momentum at the right time.

Here are the title permutations:

Kane and Alli on the prowl... again 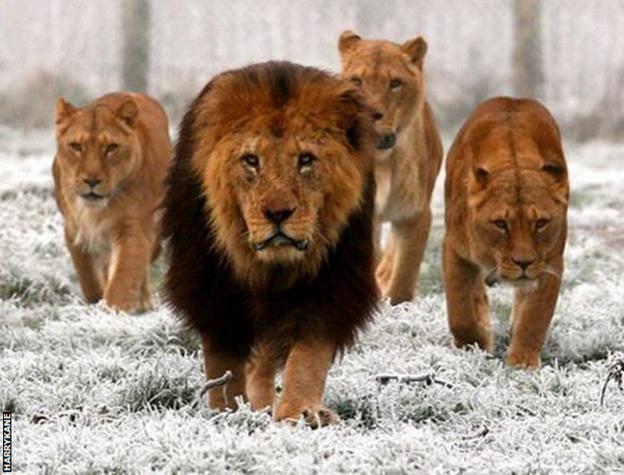 After Leicester dropped points against West Ham on Sunday, Kane used Instagram to post a picture of prowling lions waiting to pounce.

It ought to have sent an ominous warning to Stoke's defenders, who simply could not handle the England striker and Alli.

Kane set Spurs on their way from the edge of the area after Mousa Dembele breezed past several challenges, before Alli's chip doubled the lead following Eriksen's delicious pass.

Kane made it 24 top-flight goals this season by connecting with Erik Lamela's cross before Alli put the gloss on a rampaging performance with a sweetly struck volley from Eriksen's cross.

But it was not all plain sailing for the 20-year-old England midfielder.

At 2-0 he produced an astonishing miss after rounding Shay Given, who was making his Premier League debut for Stoke two days short of his 40th birthday.

From almost point-blank range he rolled the ball against the post instead of into the net - and Pochettino fell to the ground in disbelief before twice punching the surface with his fist.

Yet the evening was to end in smiles for the Argentine after a stellar performance by his team, with the manager later admitting he was a "little embarrassed" by his reaction to Alli's miss.

Learning from the weekend's controversies?

One surprising aspect from this game was the lack of contact as players lined up for corners.

That prompted widespread debate about players tussling at set-pieces, and it was noticeable this game was an hour old before there was any kind of contact between opposing players inside the box.

It came when Stoke defender Ryan Shawcross appeared to drag down Tottenham's Toby Alderweireld - but, unlike in Sunday's game, no penalty was given.

"Don't underestimate the quality of Spurs but we were poor. We didn't do the things we talked about before the game.

"We had a go in the second half but that played into their hands and they picked us off. We didn't deal with them at all. We couldn't get close to them."

"Stoke wanted to win the game and we showed personality and character.

"Maybe today is one of the performances that you feel most proud of because of the character to cope with the pressure.

"We showed hunger and passion. I have a squad of players who feel passion about the game. They deserve praise and credit for their season."

Tottenham have a week to prepare before their penultimate home game of the season against West Brom on Monday, 25 April (20:00 BST).

Stoke do not have as long to wait as they travel to Manchester City on Saturday (12:45 BST).