Palermo president Maurizio Zamparini has made an eighth coaching change of the season by firing Walter Novellino, with Davide Ballardini his replacement.

Novellino won one point from his four games and leaves with Palermo in the Serie A drop zone with six games left.

Ballardini returns for a second spell this season after being sacked in January and this is the second time this campaign Zamparini has re-appointed a manager he had fired.

Zamparini also re-hired Giuseppe Iachini in February, having sacked him in November, but the 75-year-old says even if the club go down, Ballardini's job will be safe. 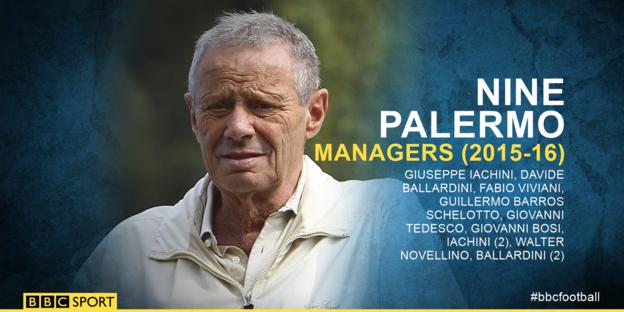 "For the first time it's in the contract that he'll stay if we stay up," he said.

"And he's prepared to remain even if we go down to Serie B, which is fine with me. I'll fight over a lot of things with him but not football."

Palermo's game against Lazio on Sunday was halted twice because of crowd trouble, while visiting midfielder Antonio Candreva narrowly avoided an exploding flare.

Seats and flares were thrown on to the pitch by Palermo fans and play was halted temporarily once in each half.