While Leicester City and Tottenham have challenged the Premier League's status quo this season, the opposite has been happening in the Women's Super League.

Chelsea, Manchester City and Arsenal made up the top three in WSL 1 in 2015 and, between them, have won every domestic cup competition since 2013.

All three have reached the Women's FA Cup semi-finals on Sunday and only 'Crazy Gang' member Carlton Fairweather's Sunderland can stop their dominant run continuing.

It was not so long ago that Fulham, Charlton and Croydon were among those regularly competing for English women's football's biggest prizes.

But as the game grows, is an era of dominance from the 'big three' inevitable?

As the WSL has grown in popularity, a distinct disparity has developed in the number of fans each club is reaching on social media. 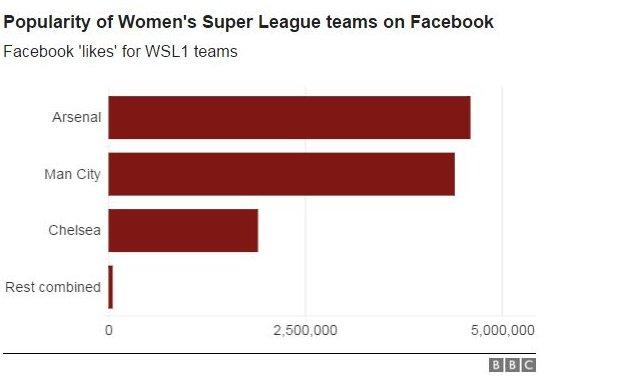 "The brands of the likes of Arsenal, Chelsea and Man City serve a point of engagement for fans of football - not just female - but also male," Simon Chadwick, professor of sports enterprise at the University of Salford, told BBC Sport.

"In this emergent phase of women's football, as it gains in popularity, branding remains a fact of life and it's important you don't disappear into the background.

"Those bigger clubs can utilise brand assets they already have, which boosts television coverage, attracting sponsors, and selling tickets."

Is it translating to results on the pitch?

While Arsenal, who have won the Women's FA Cup a record 13 times, have enjoyed success for many decades, Chelsea and City's has come only in recent years.

Even after the inception of the WSL in 2011, Birmingham City were the Gunners' closest rivals for silverware.

But 2013 remains the last time Arsenal, Chelsea or Man City lost to anyone other than each other in the Women's FA Cup.

The league has a salary cap in a bid to encourage sustained growth, but clubs have varying levels of facilities and access to expertise.

"In my experience, professional players want two things - to improve and to win.

"We offer that professional environment, with the right rehabilitation."

That offer is evidently attracting talent, with Arsenal this winter persuading England's most-capped player, Fara Williams, to join them from Liverpool, along with BBC Women's Footballer of the Year, Nigeria winger Asisat Oshoala.

Other WSL clubs have been busy in the transfer market too - Liverpool captured England left-back Alex Greenwood - yet the majority of the international stars in the league play for the big three.

"Global names like Chelsea are immensely powerful," added Chadwick. "The power of those global brands is one factor in those clubs being able to sign high-quality, oversees playing talent."

Bringing in the crowds

But that increase was largely helped by those turning up at City's Academy Stadium, where the average crowd was 1,500, while 2,710 were at Staines Town FC to see Chelsea beat Sunderland to clinch the league title in October.

Such numbers were more difficult for relegated Bristol City WFC - then known as Bristol Academy - and chairman Simon Arnold said in September that his side had faced teams with budgets on a "different planet".

It is names traditionally associated with women's football in England, like 2013 runners-up Bristol, who some fans are sad to see no longer at the very top.

But another of the country's proudest women's football brands does still play top-flight football.

Doncaster Rovers Belles hold a unique place in history, having won the Women's FA Cup six times - six times more than Manchester City. But how do they survive in this new era of women's football powerhouses?

"We have a strong theme promoting women in the game, offering a mentoring scheme for female coaches and managers," club chair Faye Lygo told BBC Sport.

"The Belles brand is really strong. Even people who don't know women's football, when they think of a team, they think of the Belles."

Lygo has seen the club fight back from a relegation that many deemed harsh. Can they rediscover their glory days?

"Those teams that have a large number of senior internationals have the ability to reach more people, so maybe it is their time to shine and, naturally, it will be a struggle for others to keep up," she said.

"Each season seems to be a complete refresh, in that you can't necessarily judge by what has gone on before."

While domestic fan bases may be growing, across the Atlantic average attendances in the National Women's Soccer League last year were far higher - just shy of 5,000.

"In countries like Japan and Germany, there has been a much greater level of engagement in women's football," said Chadwick.

"But to what extent do existing brands constrain or hinder the future development of women's football?

"At some point along the line, somewhere in the future, it might become appropriate for women's clubs to develop their own brand identities.

"Will Arsenal Ladies always live in the shadow or Arsenal men?

"At present, Manchester City draws in more people than, say, Wythenshawe Bears would - but what about in the future?"

In the more immediate future, English clubs are yet to sustain success in European competitions, as French and German sides continue to dominate the Women's Champions League.

So can English women's clubs ever be revered around the world for their success? "It's a question of time," promises Losa.