Louis van Gaal has staved off the obituary notices again.

Manchester United's 2-1 FA Cup quarter-final win at West Ham on Wednesday kept alive their chances of silverware during another week when significant questions were being asked about the manager's future.

The experience is nothing new. Six times in less than four months, 64-year-old Van Gaal has gone into matches amid a backdrop of intense speculation.

On every occasion, United have come up with a positive result.

Yet rather than bringing an end to fevered debate about who will be the club's manager next season, it has merely created a sense of uncertainty - at least from the outside.

As the men who will ultimately deliver judgement on Van Gaal's tenure - co-chairman Joel and Avram Glazer, plus executive vice-chairman Ed Woodward - aren't saying, even internally, no-one at United can be entirely sure what is going to happen next at a club for whom managerial stability was taken for granted under Sir Alex Ferguson.

BBC Sport assesses Van Gaal's position and the leading candidates to replace him should he leave the club.

Van Gaal is about to end the second season of a three-year contract he signed in May 2014 to succeed David Moyes. He thinks he could be allowed to get to the end of it.

The Dutchman's first season was viewed as a success as he took United back into the Champions League. This year has been different.

While the effort expended in beating West Ham proved United's players are still prepared to battle on his behalf, Van Gaal's regimented approach, tactics and team selection have caused bewilderment in the dressing room.

Nor are the players keen on his liking for team meetings.

Fans have voiced their disapproval on social media and in phone-ins at what they perceive as United's 'boring football'. Many want Van Gaal replaced.

Yet Woodward knows sacking Van Gaal would be a personal blow as he took responsibility for his appointment, following the short-lived Moyes tenure, which was sanctioned on Ferguson's advice.

Woodward and Van Gaal get on well personally and a massively shortened pre-season trip to China in July was negotiated solely to meet the manager's demands. 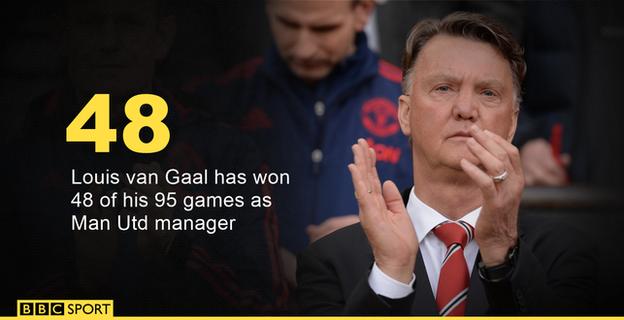 There has been no public statement about what Van Gaal must achieve to remain in his job.

But whether it be winning the FA Cup, securing Champions League football, both or neither, the decision is anything but straightforward.

Firstly, knowing how antagonistic many fans have been towards Van Gaal, the 20 May season-ticket renewal deadline will give a clear indication about whether the 55,000 supporters it affects will continue to pay up to £950 a year to watch the football they have been served up this season.

United have scored 20 Premier League goals at Old Trafford, less than half the 41 neighbours Manchester City have managed.

Secondly, if Van Gaal was to stay on, could United realistically let him enter the final year of his contract given the uncertainty that would bring?

Ferguson felt it was a clear issue in 2002, when he reversed his retirement decision, saying his players had taken their foot off the gas.

Manchester City handed Manuel Pellegrini a one-year extension to 2017 last summer to avoid the same issue, although it was widely assumed Pep Guardiola would be taking the job this year, which has proved to be the case.

If they decide Van Gaal is staying, United may well have to do the same, which in public relations terms might not be easy to manage.

Mourinho and the 'verbal agreement'

Former Chelsea manager Jose Mourinho has told friends and associates he has a verbal agreement to take over at United in the summer and has stated publicly that is when he intends to make his management return.

But there is no signed contract, nor has Woodward indicated when there is likely to be one.

Reservations about Mourinho's style of football and general conduct were expressed by United legend Sir Bobby Charlton and there are also question marks about the Portuguese's commitment to youth.

In appointing 'Class of 92' graduate Nicky Butt as United's head of academy in February, Woodward spoke proudly of the "runway" to the first team.

One recent positive for United is the impact home-grown Marcus Rashford, Jesse Lingard and Timothy Fosu-Mensah have made.

It is anticipated the club will speak to Mourinho at some point in the near future, but, with speculation about Laurent Blanc's position at Paris St-Germain starting following their Champions League exit at Manchester City this week, it could be dangerous if United waited too long.

Could Giggs step up?

It is understood the United players would welcome assistant manager Ryan Giggs' appointment ahead of Mourinho despite the Welshman's lack of experience. It is also suggested he is the preferred candidate of Ferguson and Charlton.

Former team-mates have said Giggs' quiet touchline demeanour and laidback public style do not give the whole story and point to the years he has spent gaining the knowledge that would allow him to take on one of the highest profile jobs in management.

The most decorated player in United's history, Giggs knows the club and its traditions better than anyone, giving him a 'triple tick' for that aspect of the job, a senior United source said in December 2015.

Giggs thinks he is capable and, if Van Gaal were to leave, he would be interested.

But could the club appoint someone whose managerial record extends to four games in 2014 following Moyes' dismissal, especially when inexperience has been brought into sharp focus by Gary Neville's short stint at Valencia?

Could another role be found for a player who made 963 United appearances?

If he was to leave, would close friend Butt follow him - and bring to an end - temporarily at least - the 'Class of 92's direct association with the club?

Who are the other alternatives?

Tottenham manager Mauricio Pochettino is an obvious one, having seen his reputation blossom in England, first at Southampton, now at White Hart Lane. Senior United figures have spoken in glowing terms about the Argentine.

He has not won any trophies like Mourinho though, nor does he know the club like Giggs.

United have never found dealing with Tottenham chairman Daniel Levy very easy, so it is hard to imagine United landing Pochettino - under contract until 2019 - without a protracted battle.

The next two in the betting are Southampton boss Ronald Koeman and Blanc, so the indications are that United's next manager will come from Mourinho, Giggs or Pochettino - even if Atletico Madrid's Diego Simeone is worth a mention.

Finances - and why they matter

Performance-related clauses in United's major commercial contracts means there would be a direct financial impact from a failure to qualify for the Champions League or win a domestic trophy.

Those shares do not have voting rights, but they do allow investors the right to publicly quiz Woodward about United's performance on and off the field.

The next opportunity for that will come in the second week of May, when United announce their third-quarter results.

How is it affecting next season's planning?

The lack of clarity at Old Trafford comes as most of United's rivals know exactly where they are heading.

Jurgen Klopp is still relatively new as Liverpool manager, Bayern boss Guardiola is on his way to Manchester City and Italy coach Antonio Conte will join Chelsea after Euro 2016.

In announcing Conte as their new manager on 4 April, Chelsea director Marina Granovskaia said they were pleased to have got the contract signed before the summer because it "aided Chelsea's future planning".

If United are unable to answer the simple question of who will be their manager next season, it could prove costly in terms of player recruitment, especially if no decision is made until after the FA Cup final on 21 May.

The impact of inconsistent results has not only led to managerial uncertainty.

The contract for Wayne Rooney's testimonial, announced in October 2015, remains unsigned because the proposed date of an Old Trafford meeting with Everton - 3 August - clashes with the third qualifying round of the Europa League.

Should United finish sixth and fail to win the FA Cup, they would almost certainly be playing in it.

Apart from meaning none of the commercial and media deals that must be done to promote a game supposed to raise significant sums for Rooney's four chosen charities can be completed, Everton are also facing having a significant hole created in their own pre-season preparations.

In addition, International Champions Cup organisers have had to draw up a contingency plan for the high-profile Manchester derby between United and City in Beijing planned for 25 July, only three days before the first leg of that third round Europa League qualifier.