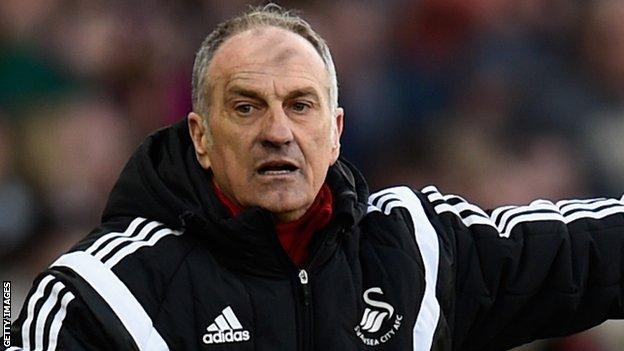 Swansea boss Francesco Guidolin has discussed his future with chairman Huw Jenkins, but does not know if the potential takeover will affect his job.

Americans Steve Kaplan and Jason Levien are in talks about taking a "controlling interest" in the club.

Guidolin, 60, has led Swansea to Premier League safety since joining in January, but his contract expires at the end of the season.

"We spoke about the future. Nothing is decided," said Italian Guidolin.

"We spoke about the team, the players, many things, but not about the takeover. I don't know what [impact] it will have.

"I confirmed to him I would prefer to stay here if possible. Now I'm waiting for his decision, but I'm happy."

Swansea reached the 40-point mark synonymous with Premier League survival by beating Chelsea 1-0 on Saturday, although the prospect of American investment has since dominated the agenda at the Liberty Stadium.

Jenkins and vice-chairman Leigh Dineen will stay on at Swansea in an executive capacity if the takeover goes through.

Jenkins has said a deal would not affect Swansea's managerial plans.

Garry Monk was sacked as head coach in December and, after Alan Curtis' temporary spell in charge, Guidolin was appointed.

The former Udinese manager said: "This is not my job. It is difficult for me to say something about this situation.

"This is an important club for me. I like the kindness of the people, the Premier League; my wife and family is happy.

"But I don't know if my future is here or another part of the world. I don't know anything about the agreements."