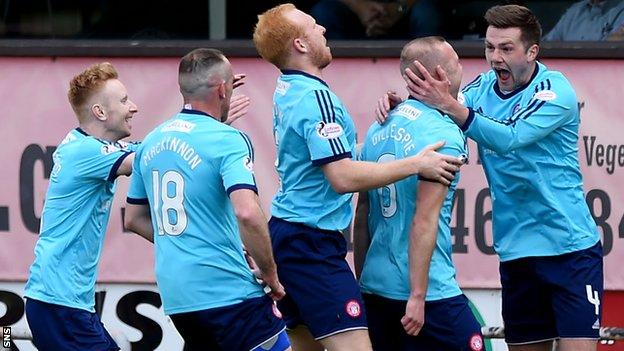 Goals from Grant Gillespie and a double from Carlton Morris ensured an easy win for Hamilton Accies over relegation destined Dundee United.

Gillespie scored in the first half with a tremendous strike before Morris added two more in the second half.

The defeat means that United's drop to the Championship could be confirmed next week when they take on their city rivals Dundee at Dens Park.

Prior to kick-off United manager Mixu Paatelainan spoke of the spirit and effort he expected from his players, but their was little of that on show on a sunny afternoon in Tayside.

Martin Canning's players knew a win would ensure they would take them a major step away from the relegation play-off spot and they blasted out of the traps early on piling pressure upon the United defence.

Ali Crawford had a couple of efforts from close range blocked and then Dougie Imrie had a shot from the angle saved by Eiji Kawashima.

The breakthrough when it came was a thing of beauty.

Morris had space on the left to play in Gillespi,e who thundered a left foot shot beyond Kawashima in off the post to fire the visitors in front, his first top-flight goal for the club.

It was no less than Accies deserved after a scintillating start and the Accies fans were on their feet again as Ali Crawford again came close to finding the back of the net.

Lucas Tagliapietra warmed the hands of Kawashima before the home side twice came close to an equaliser.

Billy McKay crashed a header off the base of the post before the strikers rebound was excellently blocked by Michael McGovern in the visitors goal.

However, Hamilton doubled their lead shortly after.

The United defence failed to deal with a cross into the box and after Greg Docherty's header came back off the crossbar Morris was first to react to nod the ball into the empty net.

United to their credit pushed forward. Scott Fraser had a net bound effort tipped away by McGovern, and from the corner Ofere hit the underside of crossbar before it bounced off the shoulder of McGowan to safety.

But the home defence looked vulnerable every time Accies drove forward and the United fans began to exit Tannadice when Morris notched his second.

Crawford's shot on target was parried by Kawashima straight into the path of Morris and the on loan from Norwich hitman volley the ball into the bottom corner of the goal.

Hamilton at times were playing with the United defence and only a last gasp tackle by Guy Demel denied Accies number four on the day.

United substitute Murray clipped the ball into the Hamilton goal but this was merely a consolation on anther disappointing day for the Tannadice outfit, who were booed off by their support.