One red card, two penalties, a thrilling comeback - and a heap of controversy.

Referee Jon Moss has been criticised for the decisions that shaped the outcome of Leicester's dramatic 2-2 draw with West Ham on Sunday, but did he get anything right?

Match of the Day 2 pundits Alan Shearer and Ian Wright take a look at how Moss handled the incidents that mattered, and what the result means for the Foxes' title bid.

"The game became too much of a pressurised situation for him. He could not handle the pressure and I think that clouded his decisions," said Shearer. "The inconsistencies were mind-boggling."

"I would give Moss a mark of three out of 10, and I think I am being quite generous," added Wright.

With Leicester leading 1-0, Foxes goalscorer Jamie Vardy - who had earlier been shown the first yellow card of the day for a foul on Cheikhou Kouyate - went to ground after tangling with Hammers' defender Angelo Ogbonna inside the area. Referee Moss said no penalty, and showed Vardy a second yellow card for diving.

Shearer: "This was the decision that changed the whole dynamic of the game. It had looked like we were heading for another 1-0 Leicester win - suddenly they were down to 10 men and there was a very different atmosphere.

"I did not think the tackle that got Vardy his first booking was worthy of a yellow card at all, but this one was definitely a dive.

"As much as you can criticise the referee for what happens later, Vardy has to take some criticism because it is blatant.

"There was no need for him to dive, because he has got the wrong side of the defender anyway. He was expecting contact, contact didn't come and there was even a little pirouette in there just as he was going over."

Wright: "Vardy hardly touched Kouyate - that one was a very, very harsh booking. The referee could easily have had a word with him for that.

"For his second yellow card, it looks like a dive to me because of the way he goes into Ogbonna and then gets his legs all tangled up. That is why he got sent off."

Referee Moss warns the Leicester defenders for pushing and pulling opponents inside their own penalty area - then points to the spot moments later when Winston Reid falls to the floor after being held by Leicester captain Wes Morgan from a corner. Hammers striker Andy Carroll steps up to make it 1-1.

Wright: "Reid had the march on Morgan, who had to try and catch him up. It is soft, but he had grabbed him.

"If the referee tells the teams in the dressing room before the game that he will not stand for any holding inside the box, then he should not have to tell the players again during the game.

"He has warned them, so he can give a penalty when it happens."

Shearer: "He warned Huth and Morgan just after half-time but here is no need to give a warning. If it is a penalty, give a penalty. You don't get a warning for a foul outside the box, do you?

"I am staggered that the referee chose the 34th game of the season for Leicester to make this point about pulling and shoving in the box.

"Why not make the point at the beginning of the season, and go into all the dressing rooms and say 'we are going to try to stamp this out completely so don't complain and moan when we give penalties for holding'.

"Do it then, not in the 34th game. This is something that has gone on not only all game, it has gone on all season and it will continue to go on until all referees make the same point.

"Moss actually gives this penalty for the softest offence. There were far worse incidents in the game than this one.

"Reid goes down far easier than he should do - he dives as well. Morgan pulls him a little bit, but he actually falls forward so it is not as though he is pulling him back.

"I don't think that was enough for a penalty - if it was, then there should have been four penalties in the game, at least. Technically, this one is a foul but, if he gives it, he has to give the others too."

89 min: Ogbonna grabs Huth around the neck - nothing given

With Leicester now trailing 2-1 to Aaron Cresswell's superb strike, they throw men forward to try to force an equaliser. Ogbonna grapples with Foxes centre-back Huth as he tries to get on the end of a long throw but Moss allows play to continue.

Shearer: "This is bizarre. It was five minutes after Moss had given a penalty to West Ham for Morgan holding in the box, so he should be looking out for things like this.

"It shows why lack of consistency from referees is part of the problem."

Wright: "West Ham know Huth is a danger in the air in the opposition area. Ogbonna has got his hand around his neck so he cannot jump and that is impeding him.

"I cannot see the difference between this one and the West Ham penalty that was given. I have got no problem with that one, as long as this is given too."

In the final minute of stoppage time, Leicester substitute Jeffrey Schlupp picks up the ball and runs down the left-hand side of the West Ham area. Hammers striker Andy Carroll blocks him off, Schlupp goes down, Moss points to the spot.

Wright: "The most you can point your finger at Carroll for is to say he was running back in there recklessly and he made contact. He should have shepherded him away from goal, but a penalty? Really?

"If I had been playing for West Ham in that game, I would have felt that the referee had tried to even things up, even if he did miss the foul on Huth. It was very soft."

Shearer: "It was never a penalty in a million years.

"I think the referee realised he has messed up in not awarding a penalty for the foul on Huth, which is why he has given this one, with the last kick of the game."

Where does all this leave Leicester?

Leonardo Ulloa stepped up to convert the spot-kick and rescue a draw for his side. It means Claudio Ranieri's side are eight points clear at the top of the Premier League with four games to go and they need eight more points to secure the title. Second-placed Tottenham, who have a game in hand, play Stoke on Monday night.

Shearer: "It was a tremendous point for Leicester at the end.

"Their right-back Danny Simpson came out afterwards and talked about how that showed they would fight to the death.

"It was a bit like when I won the title with Blackburn in 1995 and our goalkeeper Tim Flowers came out after we had battled to beat Newcastle 1-0 right at the end of the season and said 'we have got bottle'.

"Nobody remembers we were hopeless in that game, and that we were were lucky to win it, people just remember we won 1-0.

"It is exactly the same with Leicester here - they were nowhere near their best but picking up points in games like this to get across the line is all that matters, not the way they do it." 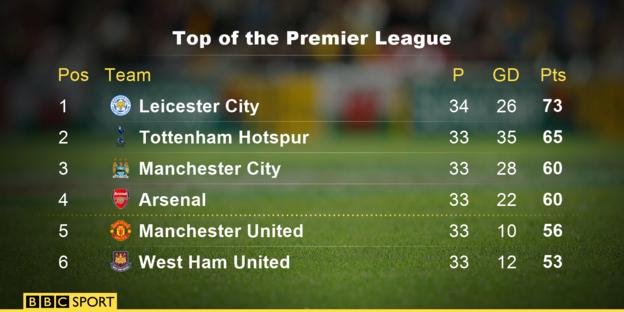 Shearer: "The impressive thing about Leicester against West Ham was their team spirit, and how they did not give up.

"They were up against it, a man down, 2-1 down and under the cosh with a couple of minutes left. Some people might have thought this was the blip they have been waiting for, but then Leicester came up with another answer, which is what they have done for the vast majority of the season.

"You have got to admire how they have kept on going and fought back for what could be a very valuable point in the title race."