Luis Suarez scored his second consecutive four-goal haul as Barcelona returned to the top of La Liga with victory over Sporting Gijon.

Victories for Real Madrid and Atletico Madrid earlier on Saturday had left Barca third by kick-off.

Suarez made it 2-0 before Barca won three late penalties, the Uruguayan scoring two and Neymar the other, and Suarez converted Messi's pass late on.

Sporting had Ognjen Vranjes harshly sent off for conceding the third penalty for a foul on Neymar.

Barca over their crisis?

At the start of April, Barcelona were nine points clear at the top of La Liga - and unbeaten in 39 games.

But losing to Real in El Clasico sparked a disastrous run of one win in six games, allowing the Madrid clubs to close the gap, while Atletico knocked them out of the Champions League.

However, 14 unanswered La Liga goals in four days have taken them to within three wins of successfully defending their title.

They are level on points with Atletico and one point above Real, with their head-to-head record meaning they will edge out either Madrid side if they finish the league equal on points. 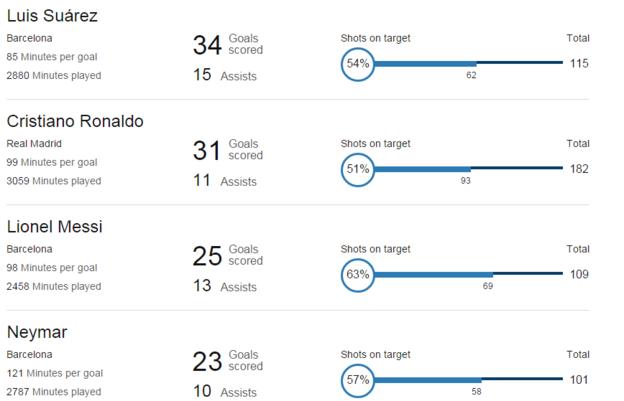 Luis Suarez took control of the race for the Pichichi - the Spanish golden boot - with his second quadruple of the week.

Suarez's fellow Uruguayan Diego Forlan is the last player other than Ronaldo or Messi to win the award - back in 2008-09.

The former Liverpool striker had a hand in the opener, putting keeper Ivan Cuellar under pressure before the ball came to Messi, who headed a looping effort into the empty net from 18 yards.

Barca's second did not come until the 63rd minute when Suarez converted Andres Iniesta's pass - possibly from an offside position.

Barcelona got a third penalty when Vranjes was deemed to have pushed Neymar, and was sent off for a second booking.

Out-of-form Neymar this time took the penalty, and scored down the centre, with keeper Cuellar almost keeping it out.

But Suarez still had time for his fourth when he fired home Messi's pass via the post.