Sunderland struggled to create chances in response, until Geoff Cameron tangled with Defoe in the 93rd minute.

Referee Craig Pawson pointed to the spot and Defoe stepped up to fire home.

Newcastle's win over Palace means Sunderland are now a point adrift of safety, although they have a game in hand over their north-east rivals.

Norwich, who lost to Arsenal in Saturday's late game, are a point further back in 19th and have also played a game less than the Magpies.. 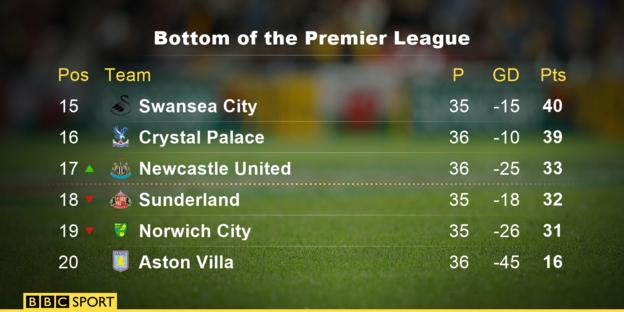 Defoe to the rescue again

Defoe, so often Sunderland's saviour this season, had endured a frustrating afternoon at Britannia Stadium but found the net again when it mattered.

The former England striker had already had seven shots at goal against Stoke but only two of them were on target and neither effort troubled Stoke keeper Jakob Haugaard.

He persevered until the end, however, and got his reward when he turned Cameron and was about to shoot when he was adjudged to have been fouled for his penalty.

Stoke manager Mark Hughes described it as a "poor decision" but Sunderland boss Sam Allardyce said it was "a blatant penalty - he went straight through the back of Jermain because he knew he was through".

His latest strike earned what Allardyce described as a "precious" point, but the Black Cats have still ended up deeper in relegation danger.

Sunderland have now lost only one of their last eight games, but they have drawn six of those matches.

Crouch, Defoe's former strike partner at Tottenham and Portsmouth, had helped give Stoke the upper hand after being given only his third league start of the season.

The 35-year-old's aerial presence had caused Sunderland problems whenever Stoke put the ball into their box and played a big part in their goal.

"It was a blatant foul on Kaboul," Allardyce said.

Kaboul also felt he was impeded but after the game Crouch denied he had fouled the Black Cats defender as he nodded Charlie Adam's cross into the path of Arnautovic.

Stoke, who had shipped four goals in each of their last three games, had chances to make sure of victory but remain safely in mid-table despite missing out on the three points.

Potters boss Mark Hughes said: "Their penalty was a soft one and it was difficult to take, certainly we were the better team."

Defoe and Crouch both played a big part in their team's goals but Defoe's only efforts on target other than his penalty were both tame and from outside the box (green arrows in the left-hand graphic above).

Crouch's controversial assist set up Stoke's goal but he did not often trouble Black Cats keeper Jakob Haugaard directly. He had a shot from the edge of the area blocked (the yellow circle in the right-hand graphic) and only one of his two headers at goal brought a save.

Stoke travel to Selhurst Park next weekend to play Crystal Palace, while Sunderland's survival bid could well be decided at Stadium of Light - their next two matches, against Chelsea and Everton, are at home, before a final-day trip to Watford.