The Welshman said club legend Zidane knows "the way to play football" and allows Madrid to express themselves.

Zidane took over from Rafael Benitez in January, with Madrid aiming to be European champions for the 11th time.

The Frenchman described Tuesday's match at Etihad Stadium as a "50/50 game".

Zidane, who says Bale's recent form has been "phenomenal", added City were a "great side".

"If you leave City space they can hurt you," he said. "The players get between the lines and cause you problems. We will try to stop that happening. Then, when we've got the ball we want to express ourselves. That's the plan.

"We'll do the best we possibly can here in this ground. City will put us under pressure and make things hard for us but we're ready for that."

Zidane won the World Cup as a player and was Fifa world player of the year three times.

As well as guiding Real into the last four of the Champions League, he has steered them to within one point of La Liga leaders Barcelona.

"He gives the whole team confidence to go out and express themselves like he did as a player," Bale told BT Sport.

The 26-year-old told a news conference he had "no point to prove" on his first return to England since Real signed him from Tottenham for £85m in 2013.

Bale added he was surprised City have not reached the Champions League semi-finals sooner.

'Expectation on Bale higher than ever'

Real's La Liga title challenge would effectively have been over had Bale not scored twice in a 3-2 win over Rayo Vallecano on Saturday.

The former Tottenham man dragged his team back into the game with a brilliant header from a corner and continued to run the home defence ragged, capping his performance with a superb winner as he picked up a wayward pass in midfield, easily surged clear of the defence and fired home a confident low shot.

Zidane piled on the praise, saying: "We needed Bale to step up, and he did so superbly. Like him, I'm very happy because he is making the difference." 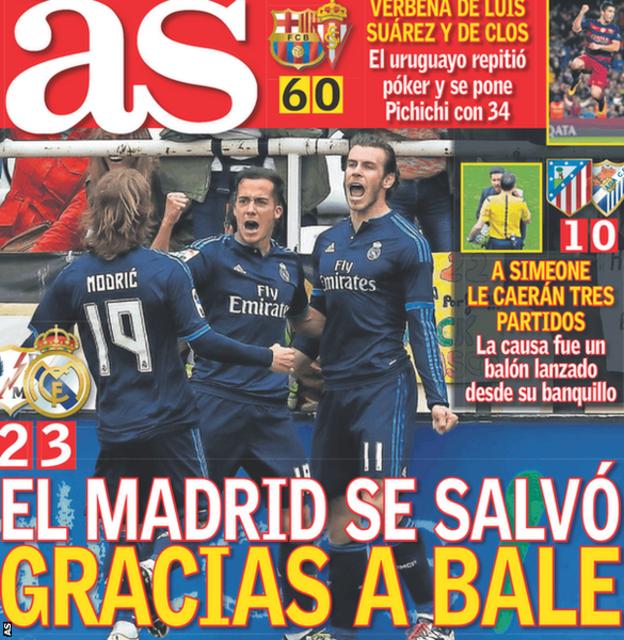 Despite spending much less time on the pitch than inprevious seasons, Bale has already scored more league goals in the current campaign (18) than his first two years with Los Blancos (15 and 13).

Indeed, on a goals-per-minute basis, Bale has been more productive in La Liga this season than Cristiano Ronaldo - the Welshman has on average scored every 87.5 minutes, whereas Ronaldo has netted every 98.7 minutes.

To demonstrate his wider importance to the team, he has also been credited with 10 assists in La Liga - more than last season and two behind his tally from his first campaign despite a shortfall of more than eight hours in playing time.

An excellent goalscoring performance in a home win against Sevilla further demonstrated Bale's ability to succeed against top-class opposition, and he has arrived in Manchester with higher expectations than ever before during his time in Spain.

Ready for the next level?

Considering his performances this season and the new-found look of confidence he is exuding, Bale could be poised to become not only an important player for Real, but the important player - the focal point of the team's strategy and a serious contender for personal awards such as the Ballon d'Or.

There is, however, one important caveat: Ronaldo.

It's notable Bale's outstanding display against Rayo this weekend, which saw him become the team's true on-pitch leader for perhaps the first time, coincided with Ronaldo's absence because of injury.

In their Champions League quarter-final, when Real were two down to Wolfsburg after the first leg, Ronaldo was the man to step forward with a tie-winning hat-trick while Bale had a relatively quiet game.

For now, Real remain first and foremost Ronaldo's team and the question of how Bale can find a way to shine without overshadowing the main man - as Neymar and Luis Suarez have largely succeeded in doing with Lionel Messi at Barcelona - remains a key factor in the Welshman's future.

Against City, however, Bale may have another immediate chance to show exactly how much responsibility he is ready and able to take on. Both Ronaldo and Benzema are doubtful with injuries, though Zidane is hopeful both will play. 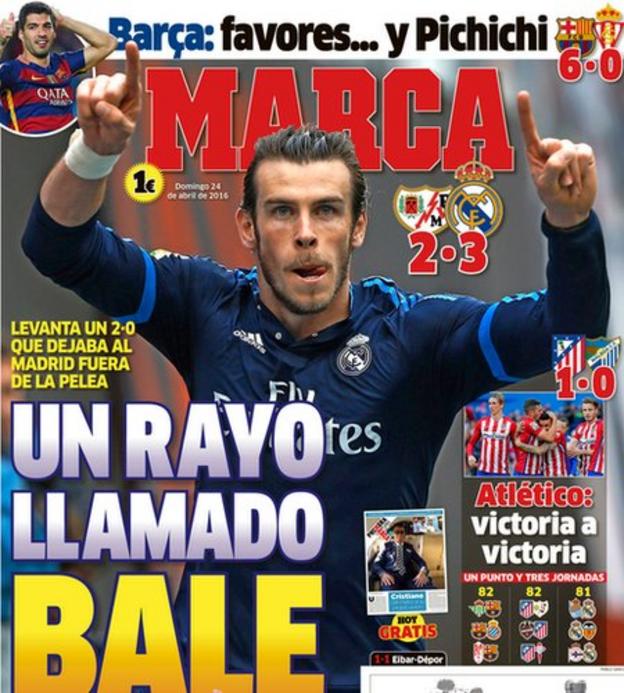