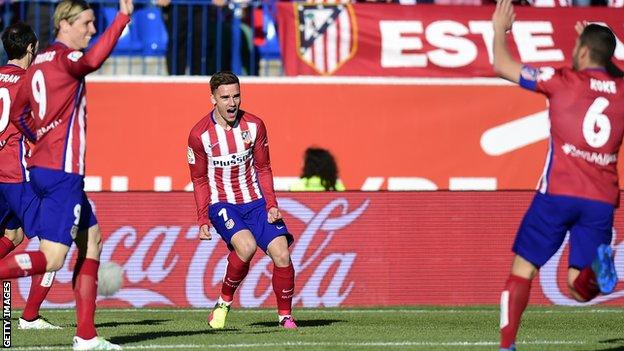 Atletico boss Diego Simeone had made seven changes to the side that beat Bayern Munich 1-0 in the first leg of their Champions League semi-final.

Griezmann scored with his second touch.

The France international's 20-yard strike, 40 seconds after coming on, gave Atletico a sixth successive league win but they remain second to Barcelona - who beat Real Betis 2-0 on Saturday evening - because of their inferior head-to-head record.

It was Atletico's fourth 1-0 victory in a row as the 2014 Spanish champions, who will be looking to reach their second Champions League final in three seasons in Tuesday's second leg in Munich, kept a 23rd clean sheet in La Liga this season.

Fernando Torres, who came off the bench at the same time as Griezmann following directions from Simeone, who is serving a three-match touchline ban, could have doubled their lead but saw his shot saved by Juan Carlos.

"The players who started lacked rhythm, which was normal, as they hadn't played in a long time. But we were able to improve and got the win."