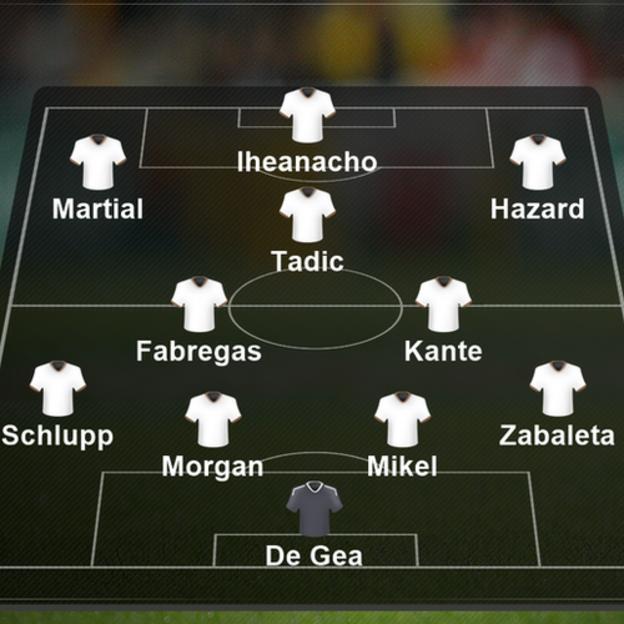 Manchester United found a goal in 'Fergie time' to join Crystal Palace in the FA Cup final and Leicester overcame the loss of striker Jamie Vardy to go eight points clear at the top of the table once again.

Chelsea found their scoring touch and Manchester City thrashed Stoke, while Arsenal slipped up again in the race for the top four.

At the bottom, Sunderland and Newcastle both picked up points in the fight against the drop but Aston Villa were awful again.

I was watching the FA Cup semi-final with Brighton manager Chris Hughton, who turned to me and said: "He'll save this."

He was, of course, referring to David de Gea, who was about to thwart Romelu Lukaku from the penalty spot and break Everton fans' hearts. Hughton was predicting things that only a manager could possibly know in the very evenly-balanced cup tie and it was starting to irritate me. I wanted to ask him how Roberto Martinez would have been feeling, and can a manager actually do anything when his team have just missed a penalty?

I was glad I didn't because it would have been the wrong question. De Gea actually 'saved' both the penalty and Manchester United from another season of mediocrity. United's win means Louis van Gaal has the opportunity in May's final to avoid an ignominious exit from Old Trafford - and also tightened the noose around Martinez's neck. Who would have thought you could do all that with one save?

You always know a team is going places when players don't want to be brought off the field at any price. That was the reaction of Pablo Zabaleta during Manchester City's win at Chelsea last week when Manuel Pellegrini substituted him after a clumsy tackle that could have seen the full-back shown a second yellow card.

The referee gave Zabaleta the benefit of the doubt but Pellegrini refused to be so lenient and whisked the player off the park without a second's hesitation.

The manager knew that much more was at stake and he needed Zabaleta for a punishing schedule, involving two games against Real Madrid in the Champions League and some tough Premier League fixtures as City look ensure a top-four spot.

Pellegrini was right to do what he did. The full-back not only played against Stoke but also showed what an important asset he is when he brilliantly raided down the right and set up Kelechi Iheanacho for a tap-in. Sometimes players have to be saved from themselves.

I had to see this performance by John Mikel Obi at centre-back to believe it. Because of injuries to three prominent defenders, Mikel partnered Branislav Ivanovic at the heart of Chelsea's defence at Bournemouth and looked as if he had played there all his life.

Apart from one moment when he went to ground and was lucky not to give away a penalty, the normally dependable defensive midfielder was outstanding.

Here is a player who has played under every Chelsea manager during the last 10 years - which speaks volumes. The relationship between Guus Hiddink and Mikel is evident, as the player has been ever-present since the Dutch manager returned to Stamford Bridge. The Nigeria captain must be an exceptional man to have survived the turbulence associated with the club,- not to mention the turnover of playing staff.

Comfortably beating Swansea at the King Power Stadium, moved Leicester closer to the Premier League title and the team then experienced a little of what success tastes like when they congregated at the PFA Awards in London.

Their captain will feel exceptionally proud of Riyad Mahrez, Jamie Vardy and N'Golo Kante - not to mention himself, having had a marvellous season - making the team of the year.

Morgan's team will feel like champions right now. The important thing they must remember is: You haven't won the title yet!

Every team has a weakness, but I'm still trying to precisely work out Leicester City's Achilles heel. Jamie Vardy was suspended against Swansea and they brought in Leonardo Ulloa - who scored twice. Then they leave out Marc Albrighton and bring in Jeffrey Schlupp, who did an outstanding job against a Swansea side who were patently out of their depth.

At this stage of the season, it's vital that Leicester hold their nerve - and that they can have confidence in whoever comes into the side. It helps when you're winning games but Schlupp was immensely impressive against the Swans and appears to be part of something very special in this extraordinary team Ranieri has built.

This was one game too far for Swansea. From the moment Ashley Williams made an uncharacteristic error, the Swans found it exceptionally difficult to lay a glove on Leicester. But as the goals rained in, it was that man N'Golo Kante who provided the energy and spirit for this emphatic Foxes win. If there has been one player who has brought an extraordinary work ethic and consistency to Leicester's season, it's been Kante.

Bournemouth gave Cesc Fabregas the freedom of Dean Court, so they should not have expected anything other than complete and utter humiliation. Chelsea's midfield maestro picked Bournemouth apart with his piercing through balls.

He set up Pedro for Chelsea's opener and then produced a masterful flick to set Eden Hazard free to net his first Premier League goal since last May. He then sent Willian through with a glorious ball, which the winger finished.

Fabregas may be approaching the twilight of his career but so was Andrea Pirlo when Antonio Conte took over at Juventus - and the coach rejuvenated his career. Perhaps the incoming Conte might do the same for Fabregas when the Italian arrives at Stamford Bridge next season? Pirlo won the title the following year, so no pressure then, Cesc...

What on earth is going on at Aston Villa? Some of their players are clearly losing the plot. Jores Okore asks not to be considered for the remainder of the season, former captain Gabby Agbonlahor is suspended pending an internal investigation into his professional conduct - and that's just off the field.

However, what has proved even more interesting than Bacuna's lamentable performance against the Saints was the player insisting that he wants to play Champions League football next season. The question I would like to pose is, with whom? Real Madrid or Bayern Munich?

Getting his agent to ring either club is a mere phone call but such delusions of grandeur will require far more imagination. Perhaps the agent could add Okore and Agbonlahor as part of the arrangement in order to sweeten the deal?

Well, it's nice to see Eden Hazard has finally turned up this season.

The lean, mean Belgium international looked a world away from the player I saw fail to perform against Paris St-Germain in the Champions League at Stamford Bridge. That evening he looked disinterested, out of form and out of shape.

Against Bournemouth, Hazard looked like the man Jose Mourinho said was the best young player in the world. The issue for Chelsea now is: can they keep the wolves from the door and retain Hazard's services?

Meanwhile Chelsea have Leicester and Spurs to play at the Bridge in games that will have a significant bearing on who wins the Premier League title.

By suggesting in his Match of the Day interview that Leicester are his preferred Premier League title winners rather than arch-rivals Tottenham, Hazard has set a wonderful stage for the end of the season. Let the games begin.

At last, Louis van Gaal has taken the shackles off his players' ankles and allowed them to play the sort of football in keeping with Manchester United's traditions.

No-one has benefited more than Anthony Martial, who probed and prodded his way into the dark recesses of Everton's back four, found a key, unlocked their door and robbed them of all their possessions.

To be perfectly honest, Everton had been warned. It was Martial who twisted Mo Besic inside out and laid on Marouane Fellaini's goal on the stroke of half-time before he produced another touch of magic to score United's winner.

Once the France forward found himself face-to-face with Joel Robles in the Everton goal, there was only going to be one outcome.

This lad looked a bit special the moment he walked into Old Trafford last summer. In fact he looks as if he could be a Manchester United captain one day.

If they don't get your results right in the early part of the season, managers have to forego the luxury of resting certain players before big games. Such was the case against Stoke when Manchester City had little choice but to play their big names a few days before their Champions League clash with Real Madrid.

Sergio Aguero netted his 28th goal of the season and was immediately taken off and wrapped in cotton wool the moment the game had been put to bed.

This left the young but brilliant Kelechi Iheanacho with the striking role all to himself and he took on the mantle with great aplomb. The Nigerian has made Wilfried Bony - who cost City £28m - look pedestrian in comparison. This is the sort of talent that incumbent Pep Guardiola will relish working with.