Tottenham will not give up on the Premier League title despite dropping two points against West Brom, says manager Mauricio Pochettino.

The Foxes can seal the title with victory at Manchester United on Sunday.

"We need to be strong in our mind and prepare for the next game," Pochettino told BBC Sport. "It is difficult. We are not going to give up." 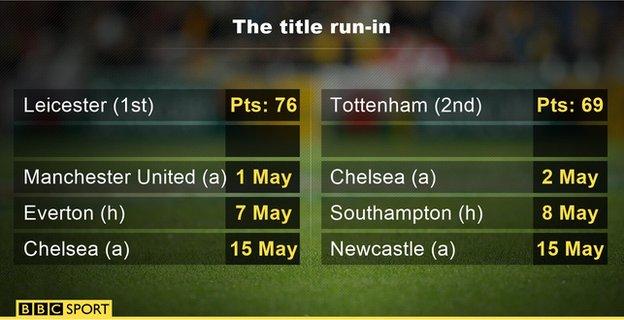 Pochettino's side travel to Chelsea on Monday, by which time Leicester could already have been crowned champions.

Striker Harry Kane said: "Hopefully Manchester United can do us a favour. It has not gone. We need to keep fighting. All we can do is keep fighting."

Craig Dawson's own goal gave Tottenham the lead against West Brom during a first half that they dominated.

But the defender made amends with a second-half header to earn the Baggies a point.

Pochettino added: "We were unlucky in the first half and created a lot of chances but this always happens in football.

"We allowed them to believe and we conceded a goal, but I am very proud because it was a big effort.

"I think we deserved the three points. We understand it was a game we must win. I must now lift the players for the game against Chelsea."