It already lays claim to being the heart of rural England, but is Leicester now the sporting capital of the United Kingdom?

BBC Sport takes a look at how Leicester compares to other cities on the British sporting landscape.

BBC Radio Leicester's Jason Bourne: "Within a mile or two you can walk from the King Power Stadium, to Welford Road, via Grace Road and then the Leicester Sports Arena.

"You bump into all kinds of people who want to talk about this city's sporting success. There's a real sense of pride in all of our teams, all of our sports. It feels like a family, a sporting family.

"I don't know anywhere else where it's like this. You can go to London, Manchester or Birmingham but they've got more than one football team. We're a one-team city and that's how we all feel part of the same thing. One community. One family. "

The giants of Manchester

Manchester, the host city of the 2002 Commonwealth Games, is famous for the success of 20-time league champions Manchester United and Manchester City, who had won two of the previous four Premier League titles before Leicester's success.

As for the city being able to compete on multiple sporting fronts it has not done so well in recent times. When City won the Premier League in 2013-14, Lancashire were relegated from Division One of the County Championship.

BBC Radio Manchester's Ian Cheeseman: "Three-time European Cup winners Manchester United have won more Premier League titles than any other club and have the biggest attendances in the UK. This season they're in the FA Cup final and they're arguably the biggest football club in the world.

"Capital One Cup winners and Champions League semi-finalists Manchester City are probably the richest club in the UK, and have recently built the best academy facilities in the country, possibly Europe. They're expanding their stadium to the second biggest in the UK.

"That's not to mention one of the largest indoor arenas in Europe, the Manchester Arena, the national cycling centre and Lancashire County Cricket Club's iconic Test venue Old Trafford.

"Do you really need convincing? Sometimes it just smacks you in the face!"

London - home of just about everything 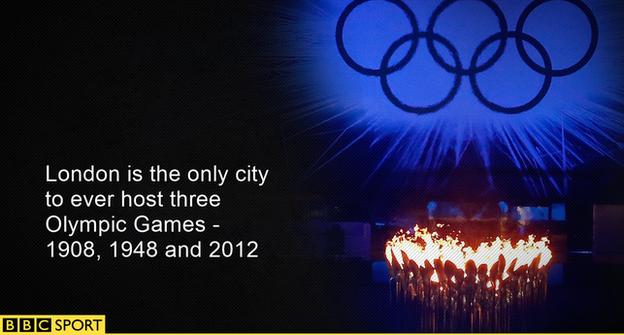 London, the only British city to host the summer Olympic and Paralympic Games, continues to stage some of Britain's biggest sporting events - from Wimbledon to athletic's Anniversary Games at Queen Elizabeth Olympic Park.

There's also the famed Boat Race between Oxford University and Cambridge University on the River Thames.

London even imports some of world sport's most glamorous competitions, with the city hosting NBA basketball games and packing more than 80,000 into Wembley Stadium for NFL matches.

While Leicester may be a one-club city, they have Chelsea to thank for delivering the title on Monday after the 2014-15 champions held London rivals Tottenham to a 2-2 draw. In total, the capital has 14 clubs in the top four divisions of English football - including five in the Premier League.

BBC Radio London's Nick Godwin: "It would be easy to fall back on the easy answers: Lord's, Wembley, Wimbledon, Twickenham and five Premier League football clubs. But that would be too simplistic - vulgar even.

"Instead, let's focus on matches under the lights at Archibald Leitch's beautiful Craven Cottage, the cutting edge 4G pitch at Saracens' Allianz Park, Twenty20 cricket at The Oval after work one summer night and the world's greatest road race - the London Marathon.

"All this in a city that lets you swim in a stunning Olympic pool, ride Laura Trott's route to gold at the Velodrome and play every conceivable sport in the Copper Box, all legacies of London 2012.

Other cities with a claim

In Scotland, Glasgow - hosts of the 2014 Commonwealth Games - has the biggest claim as a sporting epicentre.

Celtic are on track to secure a fifth straight Scottish Premiership title despite unrest among supporters, while Glasgow Warriors are capable of defending their Pro12 rugby title.

In Wales, there are a few claims for high achievers. Cardiff Devils ice hockey side were the leading light for the city, finishing second in the Elite League and runners-up in the Challenge Cup.

Newport Gwent Dragons reached the semi-final of the European Challenge Cup in rugby union, and Swansea are best represented by Swansea City, a side that was bottom of the Football League 13 years ago and are now an established Premier League club.

What they say in Leicester

"I met their manager and we spoke together about his year and well done to the Tigers," Ranieri said when asked about Tigers' run in Europe and push for their own domestic honours.

Tigers director of rugby Richard Cockerill, the man who Ranieri has convened with, is proud of the combined success of Leicester's clubs, including basketball's Riders.

"It's great for the city, full stop," said Cockerill. "The Foxes have done unbelievably well, nobody apart from themselves would have put money on them doing it.

"There is a buzz around the city, everyone is enjoying it. Hopefully it will be a good end to the season for everybody." 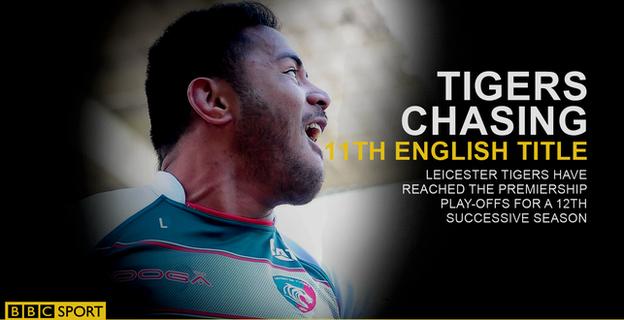 Tigers captain Mathew Tait does not mix his words, declaring Leicester "the sporting capital of the UK at the minute".

Tigers chief executive Simon Cohen goes so far as to say Leicester is the sporting capital of Europe. "There is no doubt about that," he added.

"Leicester is a hard-working city and that culture goes through its sporting clubs as well. We don't get above ourselves, we don't talk the talk and not walk the walk. We walk first then start talking about it. All those are traits of Leicester the city and its sporting clubs."

"It's not only great for the city, but great for us that Leicester City are playing this way because every one knows the name Leicester now," he said.

Leicestershire, more than a rural heartland

To take the sporting analysis beyond the city limits of Leicester lands you at Loughborough University - which boasts a hall of fame that includes Lord Sebastian Coe, Sir Clive Woodward and Paula Radcliffe.

The Leicestershire university has shaped past Olympic champions - four of Team GB's swimming team for Rio 2016 are Loughborough swimmers - and is home to a growing number of elite sporting teams.

Women's T20 cricket side Loughborough Lightning is the latest addition to the stable of teams, including netball and badminton.

As for the university itself, it is closing in on a 36th successive BUCS title.

Just 27 miles down the A46 from Leicester is England's officially recognised Home of Sport - Nottingham.

Following a campaign by tourism body VisitEngland, the city synonymous with several sporting names, including Brian Clough and figure skaters Torvill and Dean, was anointed the nation's top sporting destination in October 2015.

Leicester winning the title ahead of some of the more traditional challengers has already been compared to Nottingham Forest's achievements in the late 1970s and early 1980s.

Under Clough, Forest won the First Division title in 1978 in what was their first season in the top flight, before lifting successive European Cups.

At the moment, Leicester have two European Cups less than Forest and even one less English football title than their other East Midlands rivals Derby County.

And so the debate rages...