Sunderland climbed out of the bottom three after two goals in three second-half minutes saw them fight back for a dramatic win over Chelsea.

Nemanja Matic found space to restore Chelsea's lead before Sunderland turned the game on its head after the break.

Chelsea captain John Terry was sent off for a second booking before the final whistle, with the end of the game bringing scenes of celebration from the Sunderland players and fans. 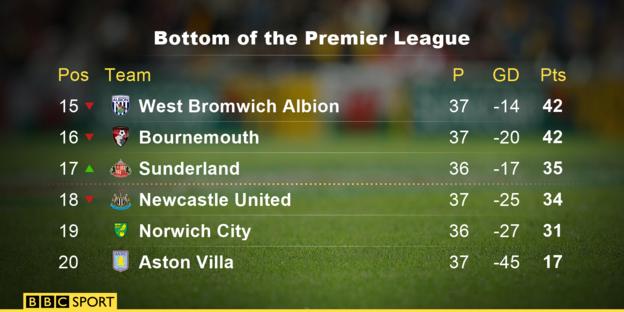 With Newcastle held by Aston Villa and Norwich losing to Manchester United, Sunderland will stay up if they win one of their final two matches of the season.

The Black Cats host Everton on Wednesday, and are away to Watford on the final day.

Defoe does the trick - again

Jermain Defoe has now scored 15 of Sunderland's 40 goals this season, and his goals have earned 14 of their 35 points.

The former England striker showed again how vital he is to their survival hopes with the way he took his winner after 70 minutes.

Until then, Defoe had been frustrated all afternoon, with his only effort to reach goal a header against the post that would not have counted anyway, because the flag was already up.

But when Deandre Yedlin's cross was deflected into his path, Defoe made no mistake - taking a touch to bring the ball under control, then burying it into the net.

"To win the game like that was special," said Defoe. "It's been a while since I scored at home but, as a forward, it doesn't matter where you score - it's important that you score."

Black Cats boss Sam Allardyce added: "You give Jermain a chance and generally he at least hits the target.

"We've crawled out of the bottom three by the number of goals that he's scored. Without him I dread to think where we would be as a team."

Will we see Terry play for Chelsea again?

John Terry's late dismissal for a second booking means his season is over.

The 35-year-old may also have played his final game for Chelsea, after 483 Premier League appearances over the past 17 years.

Terry could have few complaints for being sent off - following up the foul on Defoe that brought his first yellow card after 86 minutes with a late lunge on Khazri deep in stoppage time that meant he saw red.

It was the second time the Chelsea captain has been sent off this season, which means he will be banned for both of his side's remaining games - away at Liverpool on Wednesday and at home to champions Leicester on 15 May.

Terry's contract expires in the summer, and in February he said he had not been offered a new deal - although the Blues interim boss Guus Hiddink said at the time it was possible that Terry could stay.

Man of the match - Vito Mannone