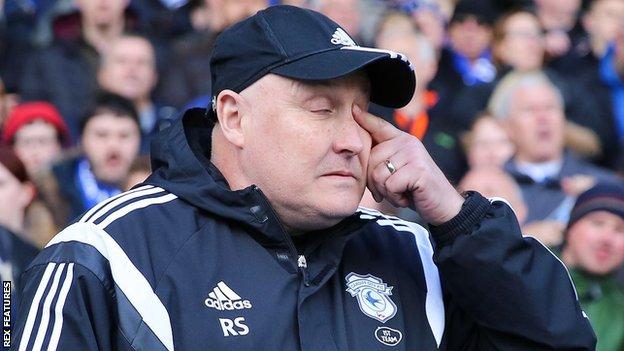 Manager Russell Slade is unsure of his future after Cardiff City missed out on the Championship play-offs.

The Bluebirds lost 3-0 at Sheffield Wednesday on Saturday, leaving them seven points adrift of the top six with one game left in the season.

Slade's current Cardiff contract expires at the end of the campaign.

Asked if he he expects to be in charge next season, Slade told BBC Sport: "We'll see. At the end of the day, it will be the owners' decision."

Slade may have overseen an unlikely Championship play-off push, but the former Leyton Orient boss has not been accepted by some Cardiff fans.

He added: "It will probably be after the Birmingham game we'll sit down and decide what happens.

"We've made progress. It's my job, the team's job and the staff's job now to see if we can take that even further.

"We've made progress under difficult circumstances at times. We are going the right way.

"We had a bad day at the office today. We have to get over that. They always happen in football - it's how you respond and react.

"I still believed we could get in that top six today and take it to the last game. Anything could've happened, but it's not to be."

"Our form at home is as solid as Sheffield Wednesday's - it's almost identical," said Slade.

Slade wants the Bluebirds' season to end with a win in Cardiff against Birmingham.

"We need to finish on a positive note. We have been strong at home," he said.

"We have made progress from where we were [last season].

"If we can finish seventh, it's progress, but not quite enough progress.

"It's been a difficult season as well, and today sums that up with people going off when things were going okay.

"We'll prepare as we always do. It's really important we finish on a positive note."