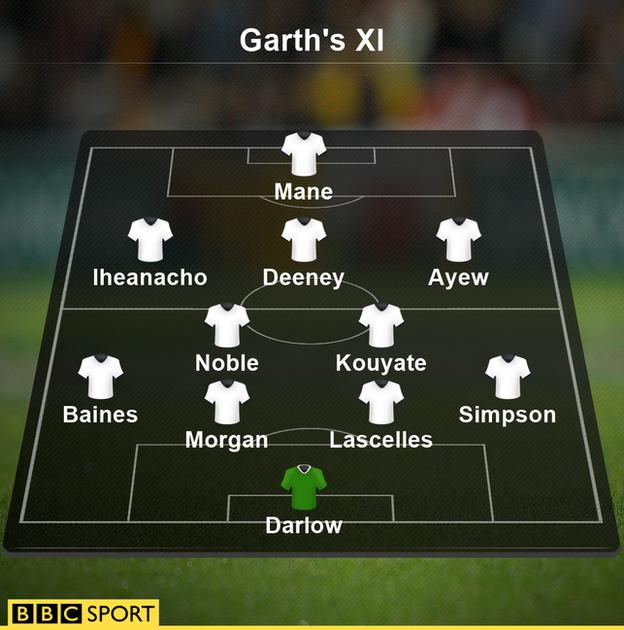 Leicester need only two more points to seal the Premier League title after a 1-1 draw at Manchester United.

They have a couple more games of the season remaining and now an eight-point lead over Tottenham who are at Chelsea on Monday.

Third-place Arsenal scraped a 1-0 victory over struggling Norwich, but fourth-place Manchester City slipped up in the chase of the Gunners as they went down 4-2 at Southampton.

At the bottom, Newcastle moved out of the drop zone with a 1-0 win over Crystal Palace.

They call them understudy goalkeepers for some reason and I have never understood why. Granted Darlow has come in for the injured Tim Krul and Rob Elliot, but with performances like this he is a goalkeeper who should be playing regular first-team football.

The 25-year-old produced a number of cracking saves against Crystal Palace in a game Newcastle just had to win to keep their hopes of Premier League survival alive. His first save from Yannick Bolasie at full stretch was superb, but it was his penalty save from former Magpie favourite-turned-villain Yohan Cabaye that changed the game.

Darlow held his nerve brilliantly which is more than I can say for Newcastle midfielder Moussa Sissoko who seemed to have had a rush of blood to the head when he appeared to try to parry the ball in the box. But that was before Darlow came to the rescue.

It looks like Leighton Baines is at it again. To think it's his first goal of the season seems remarkable bearing in mind the full-back used to score free-kicks for fun. His winner against Bournemouth was emphatic, in fact I don't think I've seen a defender appear so casual about a goal. His finish was almost nonchalant.

Now Everton have won at home, does that mean their fans will lay off manager Roberto Martinez and let him do his job at least until the end of the season?

What a tackle! It couldn't have been more than seconds into this vital game for Newcastle, with in-form Connor Wickham bearing down on the Magpies goal, when defender Jamaal Lascelles made the tackle of the game. Not only did it set the tone for an impressive performance by the 22-year-old but it was the catalyst for Newcastle's first clean sheet in four games.

Manager Rafa Benitez has only been playing the youngster because of injuries to the experienced Steven Taylor and club captain Fabricio Coloccini. However, the youngster has been so impressive in the games he has played under Benitez, the Spanish manager should have no qualms whatsoever about Lascelles holding the Newcastle fort in their remaining fixtures.

I don't think I've seen a team defend like it. They went a goal behind at Old Trafford, with no Jamie Vardy available to help them out up front yet they defended like champions and captain Wes Morgan was at the heart of it.

What I didn't expect was to see Morgan so intent on getting among the goals in order to put his team on level terms. He bulldozed his way past his marker Marcos Rojo to get his head on the ball to equalise before returning to his full-time job of defending the Leicester City goal. Should referee Michael Oliver have awarded Manchester United a penalty for the foul on Memphis Depay with minutes of this match to spare? Of course he should have, but Leicester earned a little luck.

Analysis: 'Now we find out if Tottenham can respond' - Shearer

My goodness has this lad grown into a super defender. The way he recovered and got back to snuff out Jesse Lingard's attempt on goal without conceding a free-kick was nothing short of sensational. Earlier in the season against Arsenal at the Emirates, Danny Simpson seemed to let the occasion get to him, and he and his team paid the price but not so against Manchester United. The full-back is playing the football of his life and Leicester are top of the league to prove it.

This lad has such a tremendous willingness to cover the ground especially when he wants to get on the end of something in the box, it's quite scary.

The way he left Gareth McAuley trailing in his wake for Mark Noble's toe-poke and West Ham's second goal characterised precisely what Kouyate is all about. He seldom misses games and has been a talisman for the Hammers for most of this season. He doesn't have the artistry and touch of Dimitri Payet, but players like that don't exist without the Kouyates of this world.

His first goal was brave and his second goal just brilliant.

Mark Noble has become a leader in the true West Ham mould. Quietly letting others like Dimitri Payet and Andy Carroll take a starring role, but always there as an impressive support act. Well, his performance against West Brom was award-winning like many of his roles this season for the Hammers. What is surprising is that he never gets mentioned whenever discussions around England are raised. And I'm not entirely sure why.

What a week it's been for Andre Ayew. A father for the first time, but judging by his display against Liverpool he didn't seem to be suffering from any sleep deprivation. He took both his goals exceptionally well and if the rumours are true and Swansea are thinking about offloading the Ghanaian at the end of the season, then they should seriously think again.

Frankly, the Swans have been in disarray all season and they should consider themselves fortunate that players like Ayew and Gylfi Sigurdsson have saved their skins.

I can't be hearing right. Are Watford's owners seriously considering dispensing with the services of manager Quique Sanchez Flores? Have they gone completely mad?

The manager has only been in the job for 10 months, got them to an FA Cup semi-final, secured their place in the best league in the world and they think he's underachieved!

Well, Troy Deeney's performance against relegated Aston Villa didn't provide any indication that the Hornets had lost any of their sting. While bigger teams like Norwich and Sunderland are fighting for their lives, Deeney and manager Flores have done a magnificent job and retained the club's status by keeping the owners in a league they clearly struggle to afford.

This is the second time in consecutive weeks that Kelechi Iheanacho has made my TOTW and justifiably so.

The 19-year-old is the real deal and would be playing regularly in any other side than this star-spangled Manchester City outfit who, on this occasion, lacked stardust.

This was a bad day for City and without Iheanacho they would have looked abject. What Martin Demichelis was even doing on the pitch was a mystery to me and what has happened to Raheem Sterling?

Seven goals in his last six appearances for Southampton rather suggests that Sadio Mane has got his mojo back.

I saw him tear Chelsea apart at Stamford Bridge, but then the player seemed to lose his way after speculation that Manchester United were interested in his services and his relationship with Saints manager Ronald Koeman became rather fraught.

Well, any talk of Mane joining United has gone away while the Senegalese striker looks on top of his game once again. His third goal against a poor Manchester City was superb. The way he caressed the ball around Joe Hart was just wonderful.