Wenger will reach 20 years in charge of the Gunners in October, but the last of his three league titles came in 2004 and some fans held up "time for change" banners at Emirates Stadium.

"I thought the whole stadium would be white (with posters)," he said.

"One target is to keep 100% of people happy. Unfortunately I wasn't able to do that this season."

Saturday's win took Arsenal above Manchester City - who the Gunners face at Etihad Stadium on Sunday - into third place in the Premier League table. 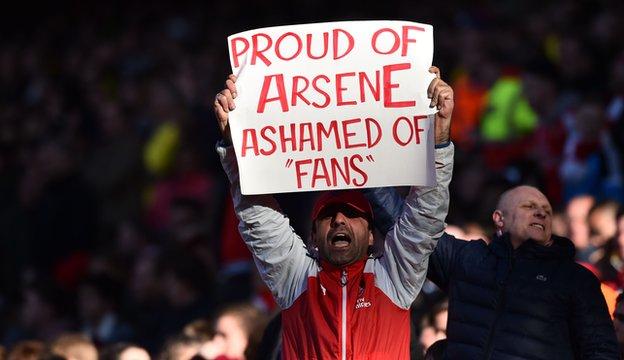 Against Norwich, a minority of supporters made their feelings known in the 12th and 78th minutes of the match - reflecting the 12 years since Arsenal were last champions.

Others responded with backing for the team and their French manager, who had earlier claimed his commitment to the Gunners had helped the club secure the loans required to finance the building of the Emirates.

"I am not in a democracy. I am in the next game, perform, try to do as well as you can and accept people's opinions.

"I think I can take that. I am in a public job and I have to live with judgement as long as it is respectful."

Wenger's contract with Arsenal runs until the end of the 2016-17 season, but he says he has no plans to emulate the reign of Sir Alex Ferguson before his retirement as Manchester United manager in 2013.

Wenger said: "You don't spend 19 years at a club - like Sir Alex Ferguson spent 26 years - without every minute of your time. You give your whole life for that and try to do as well as possible.

"There are disappointed people because we didn't win the league. Believe me, we are as well. We have to come back and win it and that is all we can do."