Leicester City manager Claudio Ranieri said it was an "amazing feeling" to have steered the club to the first top-flight title in their history.

The Foxes were crowned Premier League champions on Monday, when nearest rivals Tottenham drew 2-2 at Chelsea.

"The players have been fantastic. Their focus, their determination, their spirit has made this possible."

Ranieri spent part of Monday in Italy with his mother, but is believed to have flown back to England in time to follow the Tottenham match.

"It's an amazing feeling and I'm so happy for everyone," said the Italian.

"I'm a pragmatic man - I just wanted to win match after match. Never did I think too much about where it would take us."

Leicester started the campaign as 5,000-1 outsiders for the title after almost being relegated last season.

Ranieri said his players deserved to be champions, adding: "Every game they fight for each other and I love to see this in my players.

"I'm happy for my players, for the chairman, for the staff at Leicester City, all our fans and the Leicester community."

Captain Wes Morgan described his team-mates as "like brothers".

A number of Leicester players gathered at the home of striker Jamie Vardy to watch the Tottenham match.

"I can't wait to get my hands on the trophy," said defender Morgan, 32. "I've never known a spirit like the one between these boys.

"Everyone's worked so hard for this. Nobody believed we could do it, but here we are, Premier League champions and deservedly so.

"People saw it last season when everyone expected us to be relegated, but we fought back to prove people wrong." 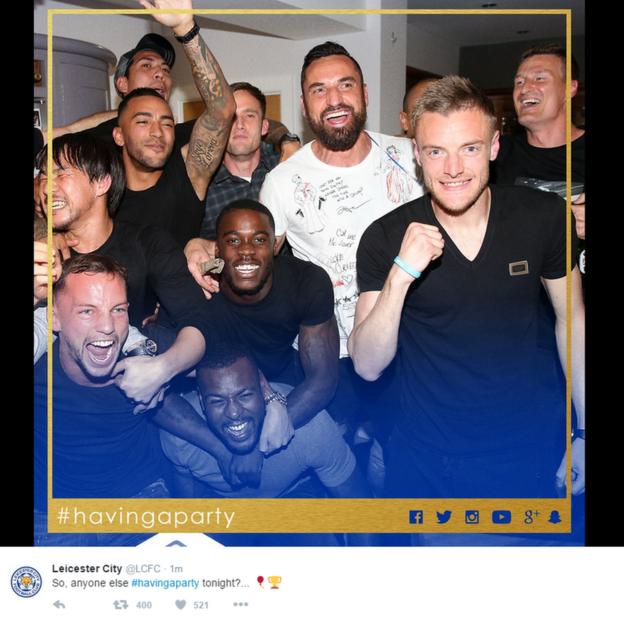 "It's an unbelievable feeling. I've never known anything like it," said the 29-year-old England international, who Leicester bought for £1m in May 2012.

"We were scrapping to stay in the league last season and on Saturday we'll be lifting the trophy.

"That gives you an idea of how much hard work has gone into this season from every single player and member of staff.

"It's the biggest achievement in the history of a great club and we all feel privileged to be part of it.

"It's even more special to have done it with these lads. Every minute of hard work we've put in on the training pitch has been worth it for this moment."

Midfielder Andy King has now won three title medals with Leicester, having been part of the team that won the third-tier League One seven years ago and the second-tier Championship two seasons ago.

"It's difficult to put into words.

"The story of where this team has come from to get to this point has been all over the world recently.

"I think the lads deserve great credit for the way they've taken it in their stride, stayed focused and kept delivering results - especially with a great side like Spurs chasing us so hard.

"We've been so consistent and just determined not to let the opportunity pass us by. We deserve this." 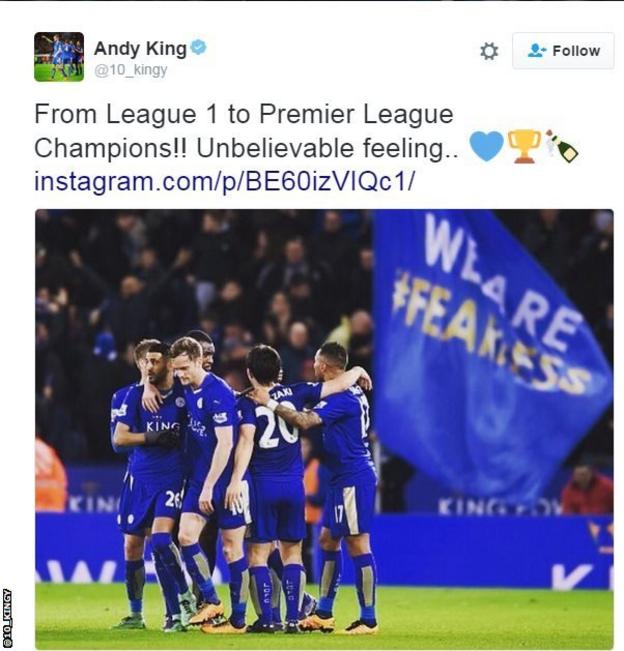 Forward Riyad Mahrez has been an influential figure for the Foxes.

The 25-year-old Algeria international, who has scored 17 league goals this season, is the Professional Footballers' Association Player of the Year.

Goalkeeper Kasper Schmeichel, an ever-present in the Premier League this season, tweeted: "Words can not describe the love I have for my team-mates.

"I dreamt of this since I was a boy and I will be forever grateful to you all."