Zlatan Ibrahimovic marked his last match for Paris St-Germain with two goals as they beat Marseille in the Coupe de France final.

PSG have won the domestic clean sweep of trophies two years in a row now.

Blaise Matuidi's early goal for PSG was cancelled out by Florian Thauvin, but Ibrahimovic then scored from the spot.

The Swede, leaving after four years in France, set up Edinson Cavani for the third, then slotted in the fourth before Michy Batshuayi's consolation.

Ibrahimovic, 34, is PSG's all-time top scorer with 156 goals in 180 appearances, and leaves for Euro 2016 amid much speculation as to which club he will join next.

Ligue 1's top scorer and player of the year had been a doubt for the final, having barely trained all week because of a calf problem.

The charismatic forward, though, was able to play, and made a significant impact in the second half before being substituted to a standing ovation in the final minutes. 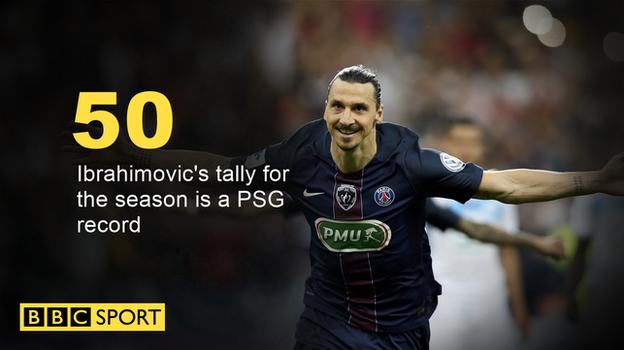 Laurent Blanc's side took a second-minute lead when Matuidi swept in Angel di Maria's cross at the near post.

Thauvin, on loan from Newcastle, rolled in an equaliser from the edge of the penalty area for Steven Fletcher's Marseille, seeking some solace after a miserable season that has seen them finish 13th in the league and use three managers.

Ibrahimovic was denied a goal before half-time as the ball fell to him at the far post following a corner, with winger Thauvin palming away his goalbound shot - an offence not spotted by referee Clement Turpin.

The striker got his chance two minutes into the second half, though, sending keeper Steve Mandanda the wrong way from the penalty spot after Nicolas Nkoulou tripped Matuidi.

Cavani's cool finish from Ibrahimovic's pass effectively ended the contest in the 56th minute, and the Swede added a fourth by racing clear to beat Mandanda.

Belgium international Batshuayi, Marseille's leading scorer, touched in a loose ball late on for his 22nd goal of the season, but his team were well beaten by then.