If Manchester City miss out on next season's Champions League it is a huge failure, but it is not a disaster because the future of the club is not at stake.

If Manchester United win their last two games and beat their local rivals to fourth place, then City are not going into freefall or financial meltdown in the way Leeds United did when they failed to qualify in 2002.

In terms of the outlay they have made, City should be finishing in the top four - no question - and, in the short-term, not doing so would be a massive disappointment.

It delays their ambition to establish themselves as a major European power because they want to win the Champions League, not just get in it.

But the biggest plus is that it would not affect the club's stability and I don't think it would affect their ability to attract top players this summer either.

What next for City? Top players will still want to play for Pep

City's fans do not want to watch their side play the lesser teams from different corners of Europe on Thursday nights - they want to see them against the best.

They will not get that if they finish fifth in the Premier League.

But, overall, I would suggest to City fans that the future is still bright and still rosy, even if they have to settle for the Europa League next season.

The club will still move forward because the top players will still want to join them.

That was always going be more down to having Pep Guardiola as their new manager next season rather than being in the Champions League itself.

Every player Guardiola will sign will think City will only be out of the Champions League for one season only, and I would be amazed if it were for longer.

Man Utd have been given the boost they need

City have still got a chance of making the top four of course - the season is not over yet.

But I think United will win both their remaining games - at West Ham on Tuesday and then at home to Bournemouth on the final day - which would guarantee they finish above City.

Playing the Hammers in their final game at Upton Park is still a tough one but knowing that a top-four finish is now in their hands will be a massive boost for United's players and their fans.

It is going to be a brilliant game, and I am really looking forward to it. 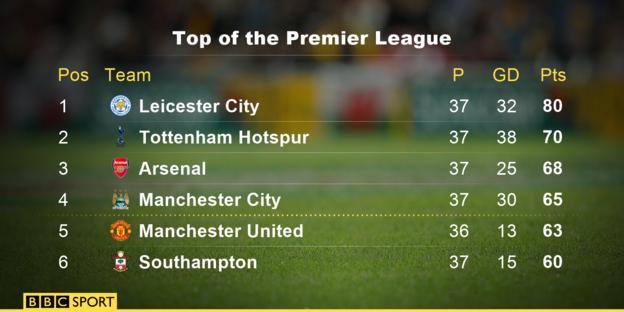 What has gone wrong for City?

The reason City are in this position is not down to them failing to beat Arsenal on Sunday.

City actually performed quite well after a tough game in midweek against Real Madrid at the Bernabeu - they pressed, played at a good tempo and looked dangerous.

We still saw some of the issues they have had all season, such as with the first goal they conceded.

Defending set-plays has been a long-standing problem for them and, against the Gunners, Eliaquim Mangala was at fault. He gambled, tried to win the ball early and paid the price.

They have had some bad luck along the way with injuries to some of their key players but it is their away form that has let them down the most.

On too many occasions they have not played with the same intensity they showed against Arsenal. The question is, why?

No farewell party for Pellegrini

Outgoing City boss Manuel Pellegrini did not get the send-off he wanted at Etihad Stadium on Sunday.

If City do not make the top four then it is a kick in the teeth for him, but I think some of their players need to question themselves more than the manager.

I understand when people point to the announcement in February that Guardiola was taking over as the thing that derailed City's season - but I do not see it as an excuse.

Apart from one or two of their players who must have known they were leaving the club anyway, my feeling is that they should have been trying to impress the new manager - and the performances should have got better, not worse.

As far as how Pellegrini will be remembered, I asked some City fans about this on a radio phone-in recently and they were very complimentary. Part of that was down to him winning the title and reaching the Champions League semi-finals but it was also because he is so humble.

I think his players like him, which is usually a good thing, but sometimes they have not performed for him.

So, is Pellegrini too nice? The evidence suggests that is not going to be an issue for City under Pep.

He always gets a tune out of his players in terms of the intensity they play at and, although his Bayern Munich side also lost in the semi-finals this week, they were very unfortunate to go out.

There is another reason for City fans to be excited - they are going to get better quickly, I am 100% sure of that.