Deep, deep down, footballers are just like us, really.

Yes, they might have flashier cars and a few more tattoos, but they also enjoy a party. And who doesn't?

Footballers celebrating is nothing new. But it seems this season, more than ever, we've been able to get an insight into what happens after the trophies have been lifted.

Leicester City got their hands on the Premier League trophy on Saturday amid scenes that that were barely conceivable 10 months ago.

Out of all the chaos has emerged a man called Christian Fuchs.

The Foxes left-back, the gift that keeps on giving, could well have been lifted from an Inbetweeners script, in which they would probably call him the Archbishop of Banterbury, or something equally terrible.

Filming the celebrations from Jamie Vardy's living room like he's at a teenage house party, recording the actual moment his team lifted the Premier League title and then pouring a bottle of champagne over his manager Claudio Ranieri - the Austrian brings the fun times.

Fuchs is not the only man who had the composure to film a trophy presentation.

Wigan's Kevin McNaughton kept his head - when all others were losing theirs amid ticker tape and pyrotechnics - to capture the first-person view of being handed the League One title.

The 33-year-old says what we're all thinking: "Scenes." 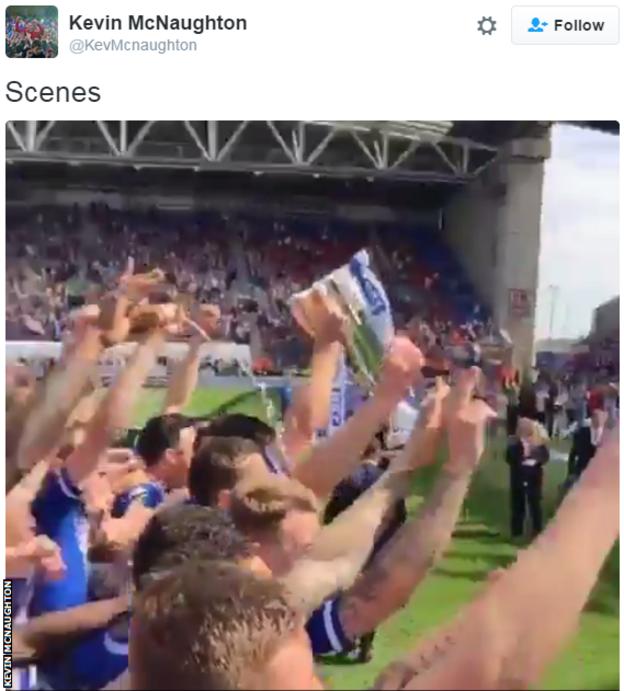 And when it comes to frothing the champagne, Middlesbrough and Burton showed they can fizz it up with the best of them.

Boro, who came second in the Championship to secure a return to the Premier League after a seven-year absence, posted shenanigans in the dressing room on YouTube.

The Brewers got in on the action too, with boss Nigel Clough getting a right soaking as a reward for taking the club to the second tier for the first time.

Just like supporters, they are generally terrible at singing.

Here is the promotion play list as selected by the players of teams who secured a big finish to the season.

Even the guys wearing the suits and ties know how to let loose it seems.

David Sharpe is Britain's youngest chairman, and this weekend he was being literally carried on the shoulders of Wigan supporters after the club secured an immediate return to the Championship by winning League One.

He even gets a wedgie for his troubles.

And while Sunderland cannot pop the champagne just yet, their keeper Vito Mannone was serenaded to the tune of the White Stripes' Seven Nation Army by his chairman Ellis Short, after helping his side to a much needed 3-2 win over Chelsea in the battle to beat the drop from the Premier League.

There there. Let it out. It's OK for fully-grown adults to cry about people kicking a ball around, honestly.

And it can often be two very different emotions that bring on the water works.

Spare a moment to consider the journey of Bristol Rovers boss Darrell Clarke.

Go to a holiday island

Cheltenham Town's National League-winning players might have nipped over to the historic sights of Bellver Castle and La Seu Cathedral in Palma on the island of Majorca this weekend.

But only if they think they're going to a nightclub, you would expect.

And if it all gets too much...

It's all a bit too much for some. Namely, Burnley's David Jones, who was recorded falling asleep on the team bus by sympathetic team-mate Joey Barton on the morning after their celebrations.

But the last laugh was on Barton, who was left without a medal during Burnley's trophy celebrations.